7 pics. Loki was rescued by Coda Falconry and took part in the Falconry Display during King Harold’s Day at Waltham Abbey.  Although presently still juvenile, Loki will eventually live for around sixty years, is highly intelligent, full of cheek and seems to like the attention of being a substitute falcon.

Cheek is why Loki is on a long tether (creance).  Loki likes doughnuts, other people’s doughnuts and not too fussy how they are obtained.  Ravens do have a dark reputation, but he is in fact a handsome fellow.  It’s just that they tend to hang around battlefields (well a birds got to eat) and otherwise nick any bauble that takes their fancy. 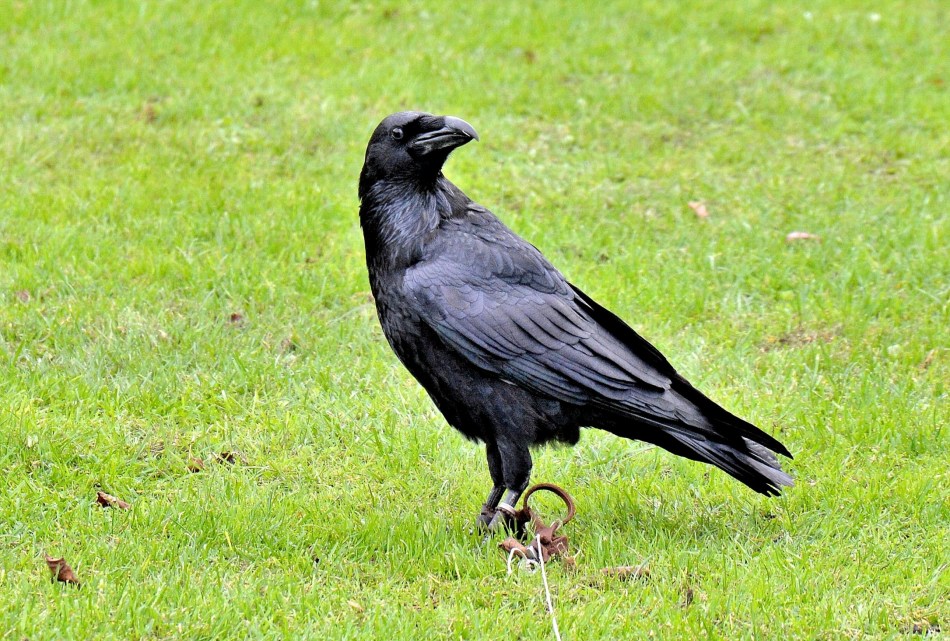 .. and casing the joint for opportunities.

This is Loki’s official portrait which shows his beautiful plumage (reminds me of the Norwegian Blue). 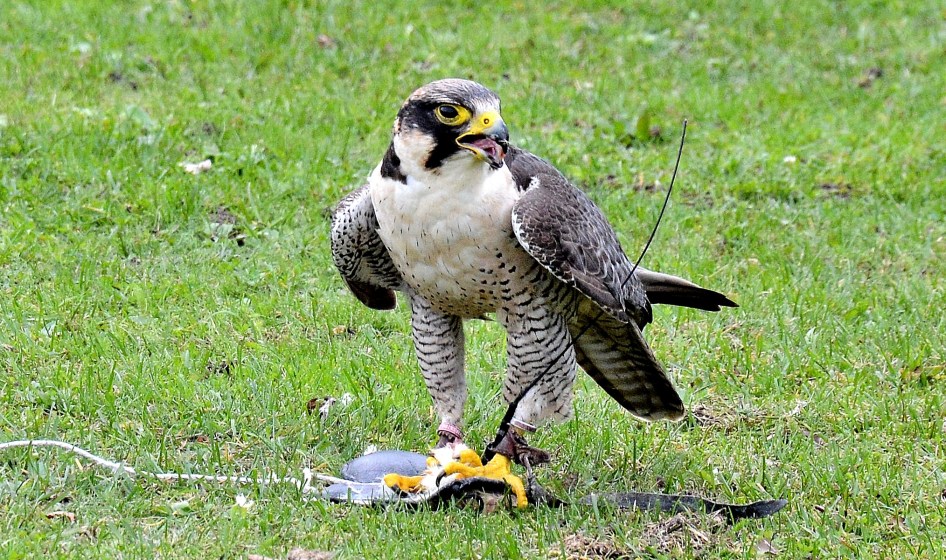 This is what being a falcon is all about. Being a Peregrine Falcon, as flown by monarchs.  More of her further down. First a cute Barn Owl. Click on an image twice for a closer view.

“I feel pretty, Oh, so pretty, I feel pretty and witty and bright! And I pity, any girl who isn’t me tonight” .

“Really, do I look pretty”. “I do like a little owl though”. 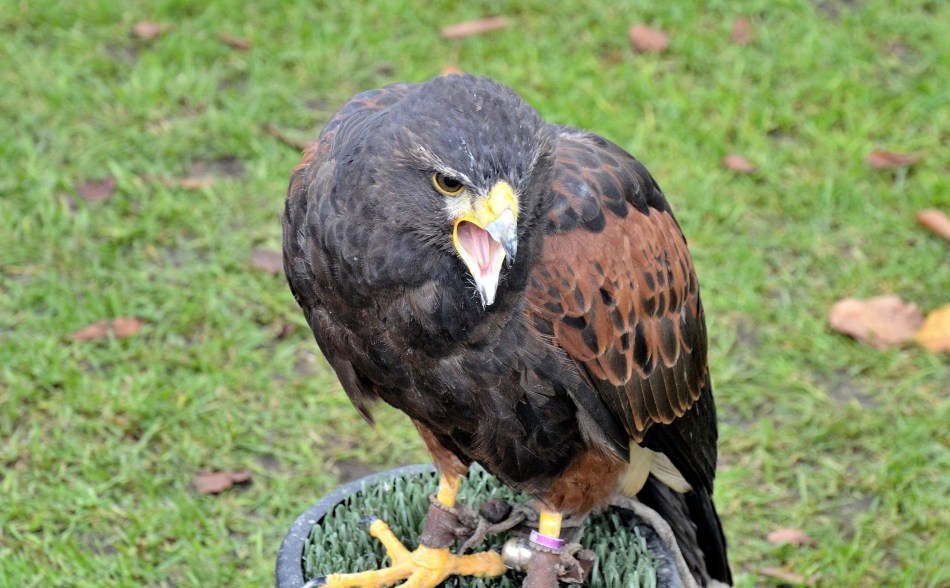 “But not dogs. We screech at dogs”.

“Except really little ones, yum“.

Harris Hawks (really buzzards) hunt in groups and share their food.  As a result they work well with falconers, who they regard as part of their hunting group.

“To be a good falcon, one has to be determined”. 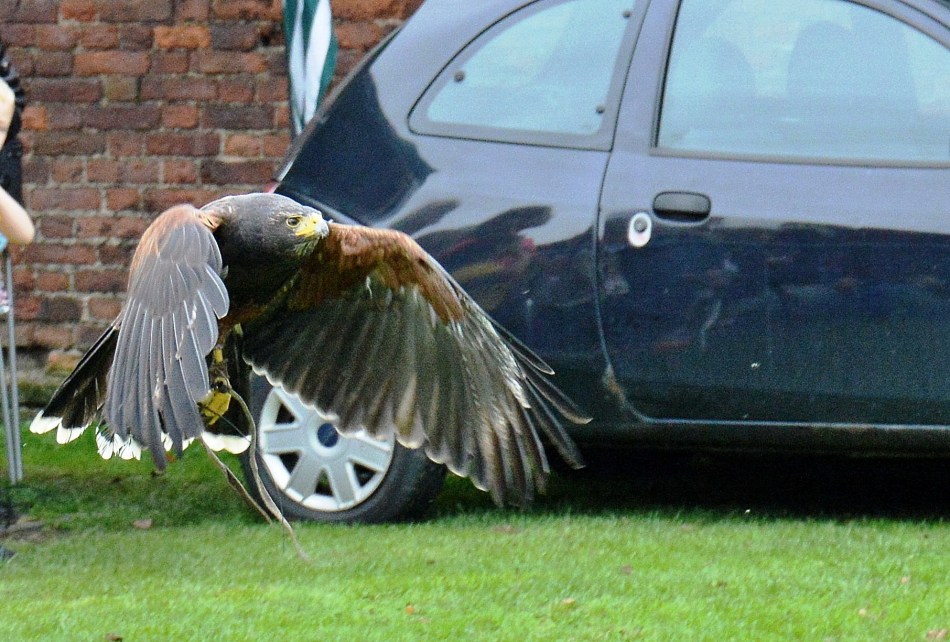 “And strut about as if one owns the place”.

These are beautiful and very impressive birds, but I don’t think I’d like one in my kitchen. 🙂 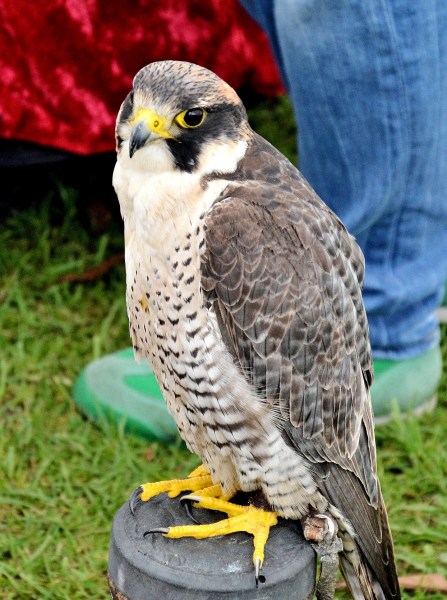 “Lets get to the main event, and take a gander at those legs”. 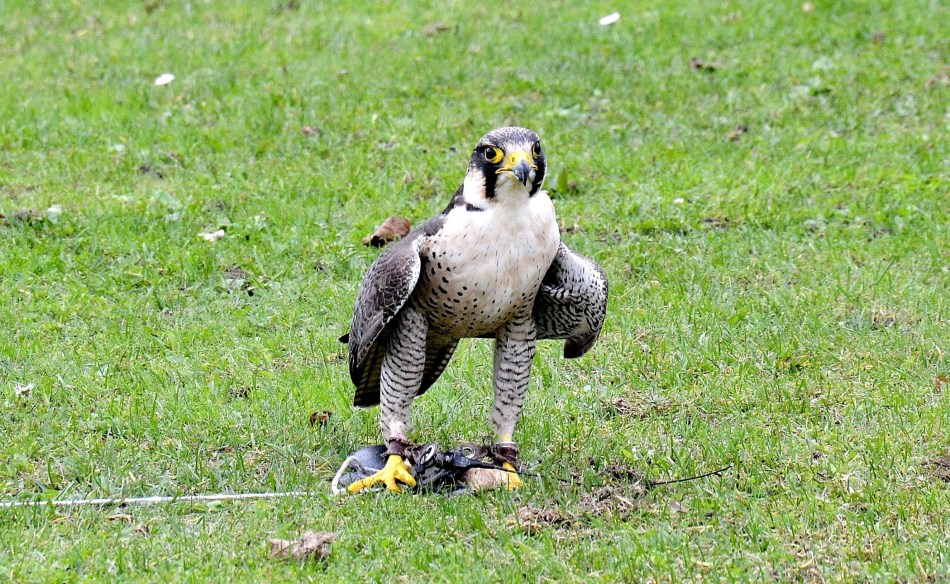 “Anybody who thinks that I look like Gonzo the Great, does so at their own risk.  Especially that dozy looking photographer over there”. 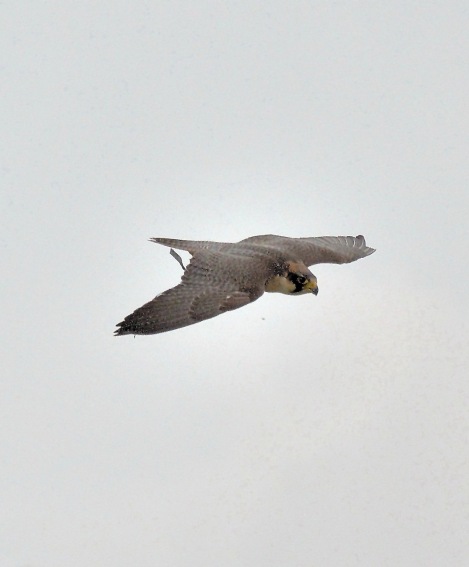 Peregrine Falcons fly on the level at up to 60 mph and dive at more than 200 mph.  These are the jet fighters of the falconry world and come with a regal attitude. Too fast to land safely on a gloved hand, so they chase a lure swung at the end of a long tether.  Too fast for me to get a good photograph, but I did at least get her in the frame a couple of times. 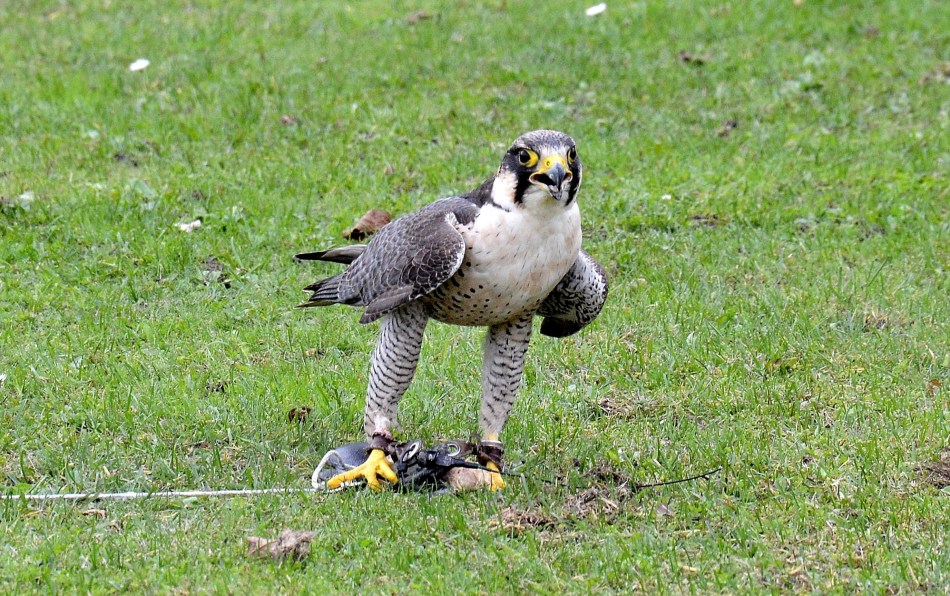 Once a Peregrine has caught the lure they are allowed to finish the morsel.  Otherwise they feel cheated and will not chase the lure again.

“Toodle pip.  Do come again, we’ll have some tea”.

I hope that you enjoyed seeing these amazing birds.  The pictures were taken during King Harold’s Day at Waltham Abbey.  The display was provided by Coda Falconry where you can spend more time with the birds for a fee. There is another Harris Hawk in flight and diving at Leeds Castle.

There was also Loki the cheeky rescued raven,  He gets a post of his own here.

17 pics.  A Harris Hawk waits pensively for the launch signal.  That beak means business.  You can click twice for a better view.

The trainer sends a morsel into the air using an elastic catapult.   A little to the right of the hawk is a distant seagull and just below is the morsel.  The hawk now has folded wings for the dive.

And the flyby with trophy.

“Nothing to see here, move along now.  Ahh, with fava beans and a nice bottle of Chianti”. 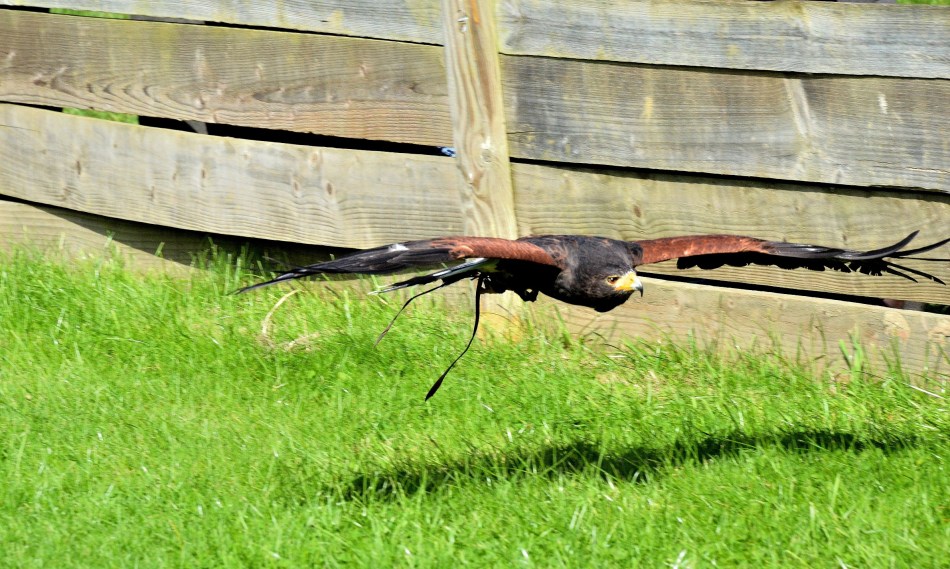 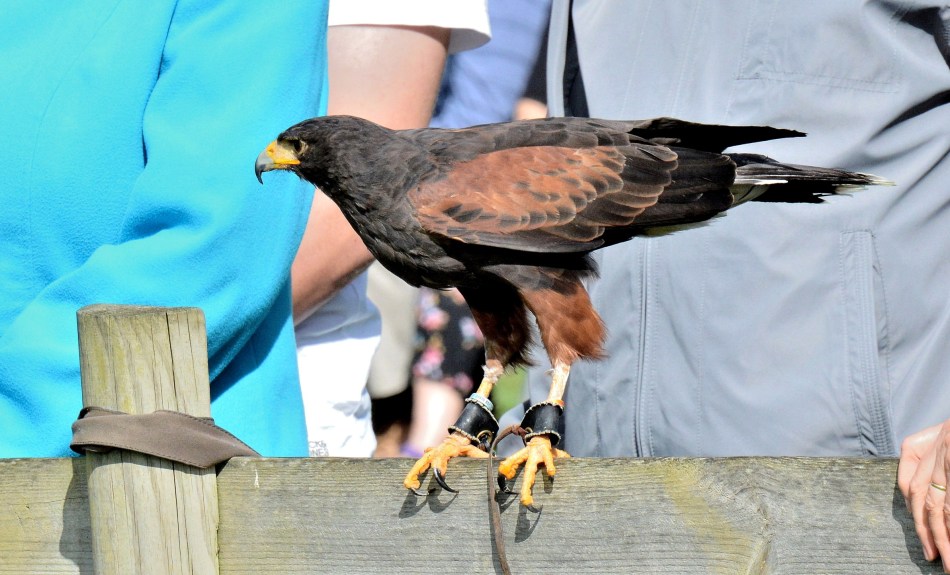 “I’m firm but fair and you will applaud”.  And they did.

The owl, the trainer said, had a short attention span and was easily distracted.  He also said they were “thick”. 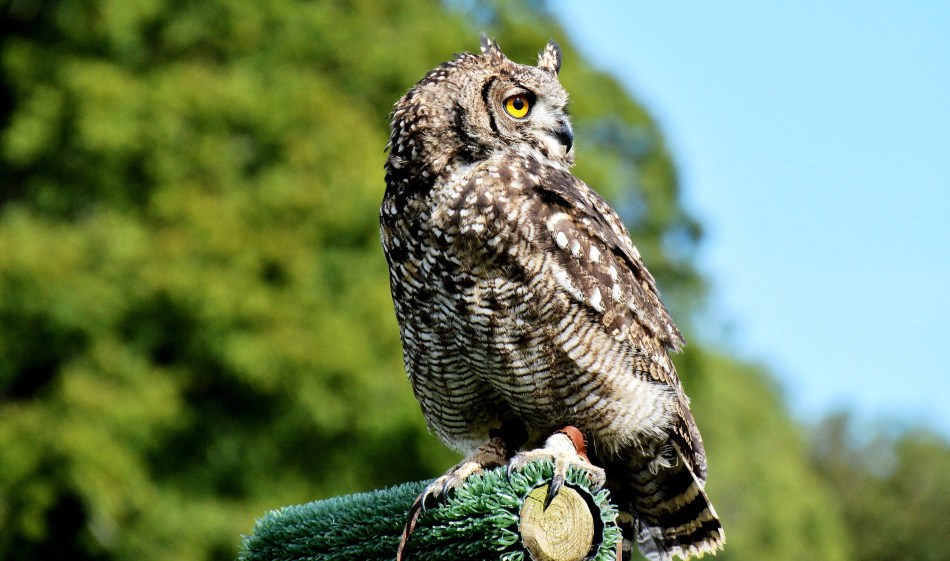 “Right, I’ll have your scraggles off”. 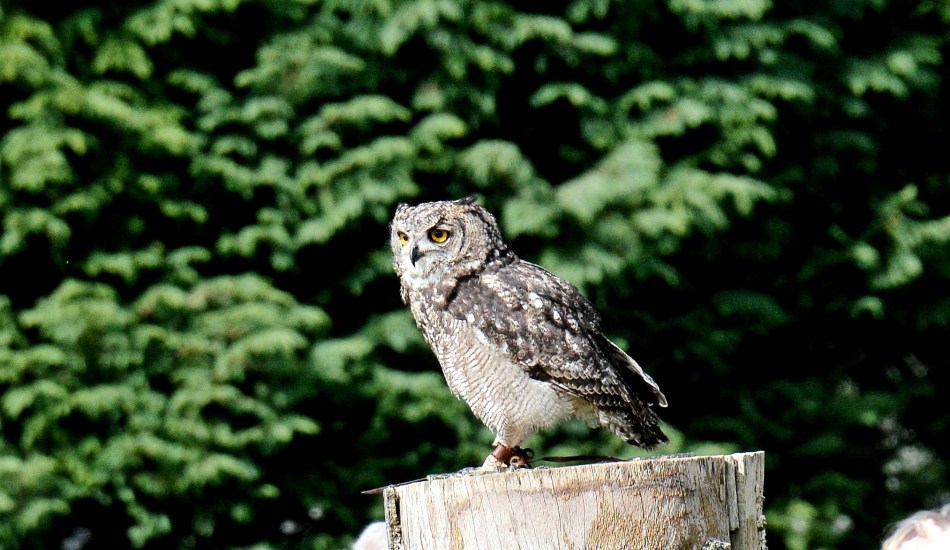 “I am, in fact, wise and dignified and I’ll murgle anyone who says otherwise”.

Meanwhile, several gulls were scriking and showing off by making feint dives at the hawks.  But, they carefully kept their distance.  The hawks disdained any interest.   After all, one does not converse with one’s food. 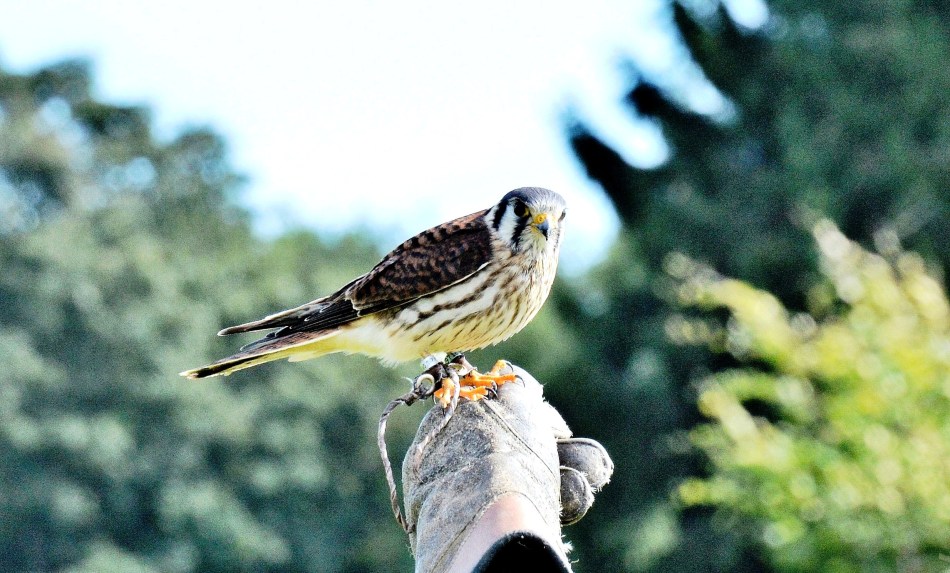 This little miss is a North American Kestrel weighing in at a mere 4 ounces.    She was so fast on the wing, that the only photographs I have, are where she used to be.   Even the gulls were bemused and kept their distance. 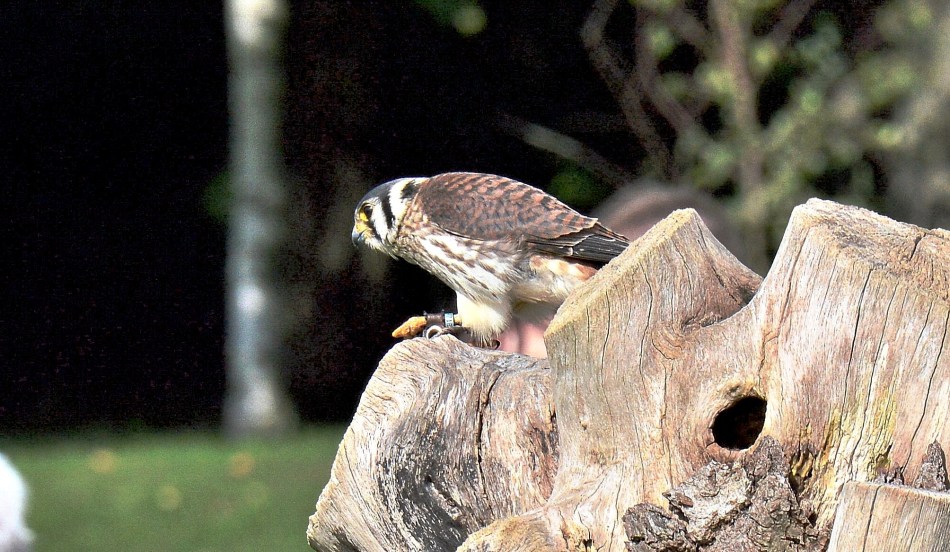 Falcons, we are informed, will only fly free and return if they are happy with their conditions.  They also live twice as long as in the wild. So, everybody’s happy.  Yay . 🙂

There are more falcons including an amazing peregrine here.

The Grey Heron is resident in the UK and can be found near rivers and lakes.  Although it is a water bird it does not have webbed feet and does not swim.  They  catch their prey of fish, small birds, frogs and molluscs by standing at the water edge.  They will also feed upon rodents in fields.   There is a broad variety of Heron species,  some of which are called Egrets or Bitterns and some species have been known to use bait.

This one, photographed at the east end of Regents Park, was difficult to get close to.   Unlike swans, geese and ducks they don’t feed of human gifts unless you happen to have a live fish about you. 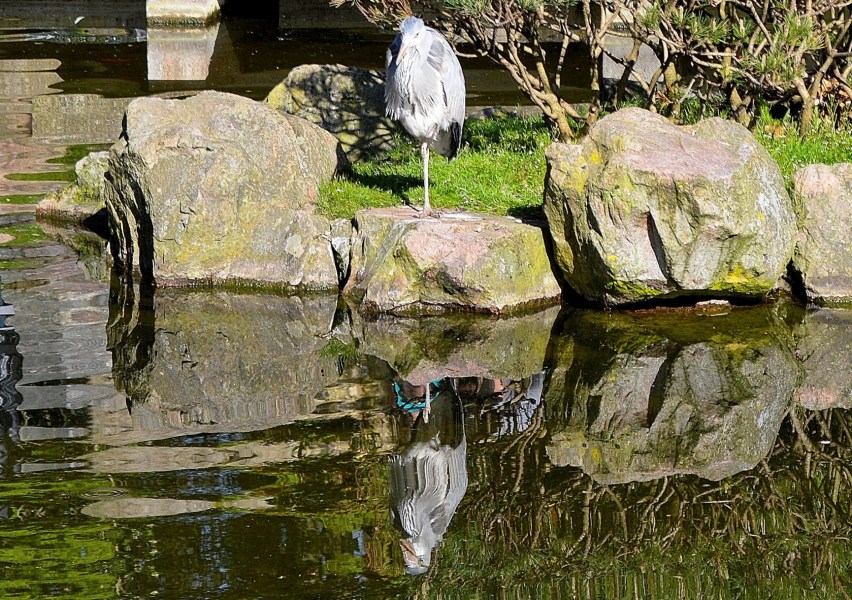 Upon Refection I’m Twice the Bird I Used To Be 🙂

At the Queens Gate

On the other side of the Serpentine Lake is Hyde Park. We’ll have a wander over.

And, In the Autumn

Back at Kensington Gardens in the Autumn 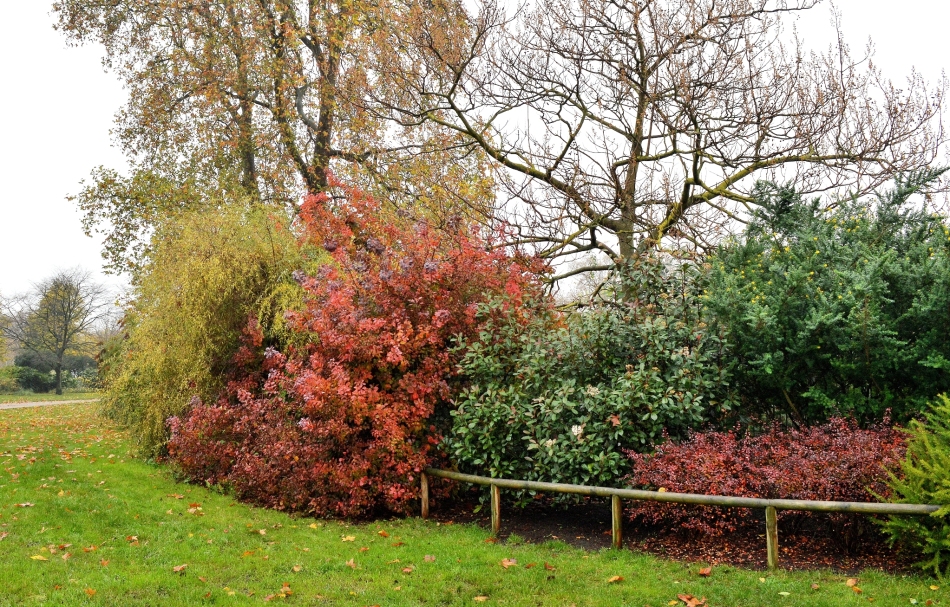 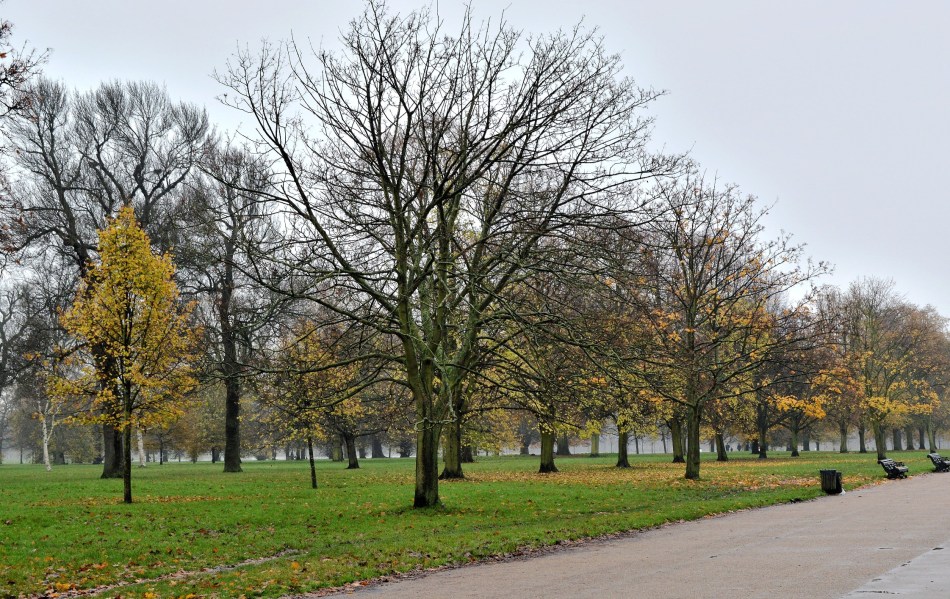 A beautifully atmospheric autumn evening,  at 11 am.   I do love the British weather.