The London Garden Museum in Lambeth 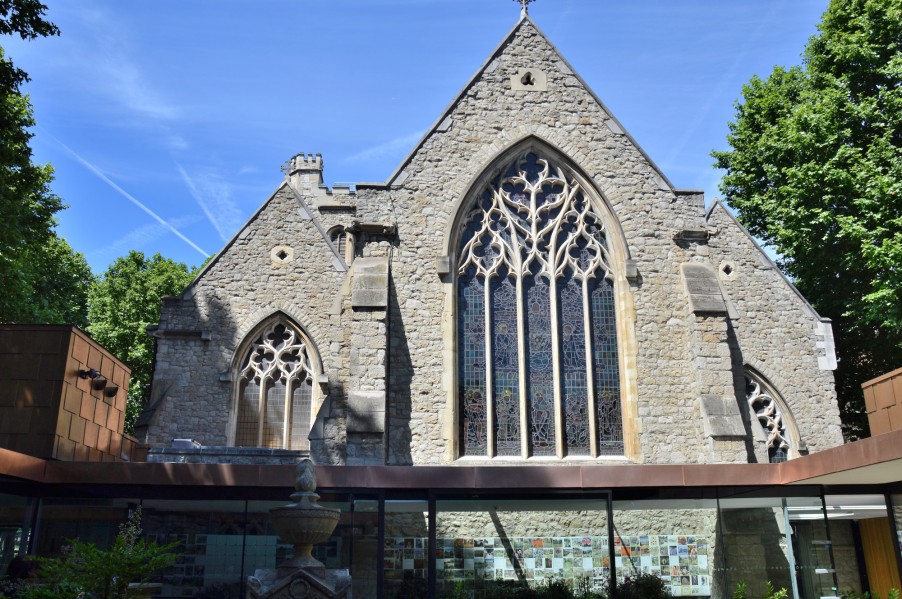 The London Garden Museum is situated in and around the old church of St Mary adjacent to Lambeth Palace.  The church has origins dating back almost a thousand years.  It was deconsecrated in 1972 and saved from demolition by Rosemary Nicholson.  By 1977, Rosemary and her husband John had converted the old church into the world’s first Museum of Garden History.  Rosemary and John were admirers of John Tradescent ⇒ who is buried at St Mary and is credited as being the first great British gardener and plant hunter.   In more recent times the venue has become known as The Garden Museum.

In 2016 the museum was closed for remodeling, making use of  a Heritage Lottery grant. It was re-opened in May 2017.  Unfortunately the beautiful Knot Garden ⇒ has been lost during the remodeling and the external gardens still need some work.  The external gardens and café are free to enter but there is an entrance fee for the museum.    Website ⇒. 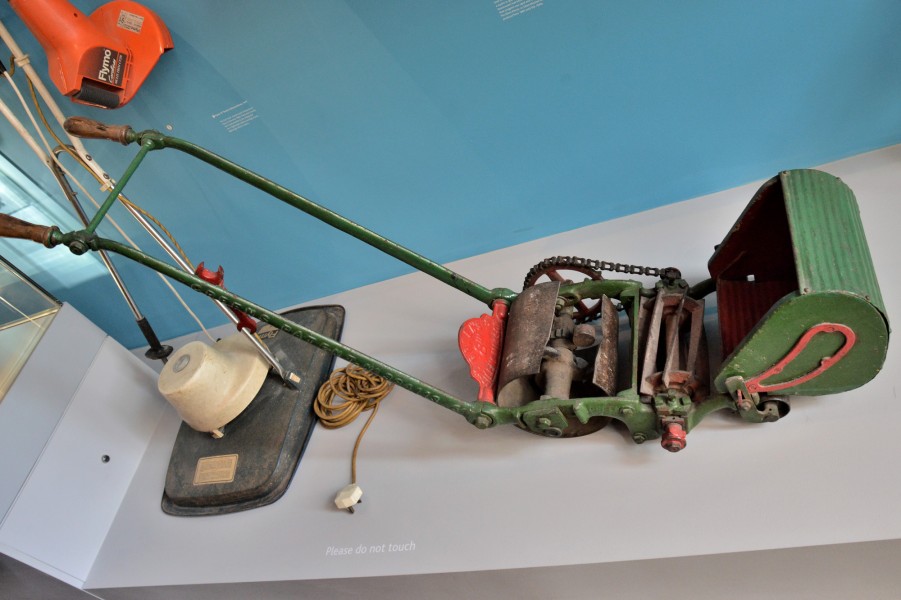 The seemingly humble lawnmower has been of considerable influence.  Before its invention, by Edwin Budding in 1830, grass was cut by scythe.  Only the rich could afford such a labour intensive luxury.  Even so it was only rough cut compared with today’s standards.  It was because of the lawnmower we have the English garden and advancements in lawn tennis, lawn bowls, cricket and golf.

The inside of the old church is in good condition and alongside of some gardening history are there is some quite stunning stained glass. 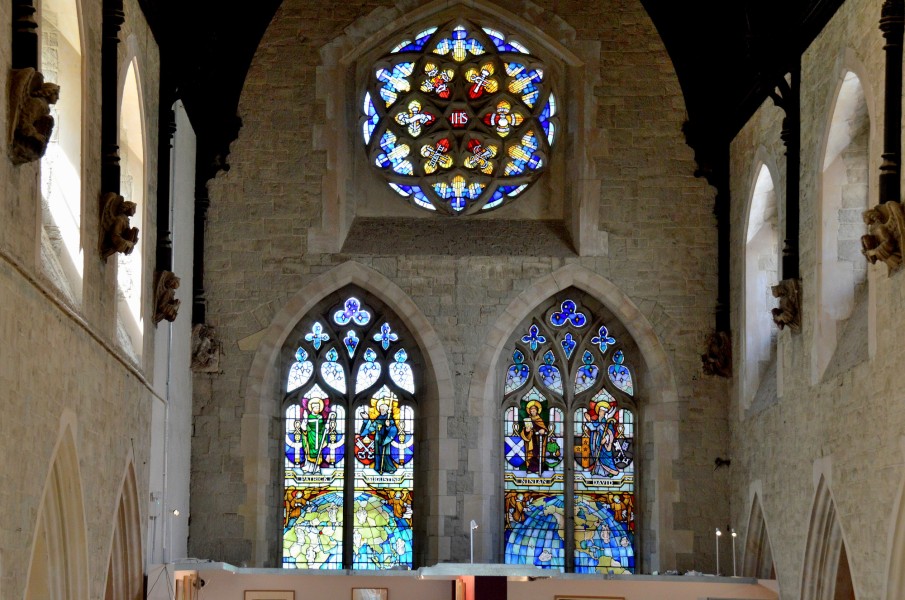 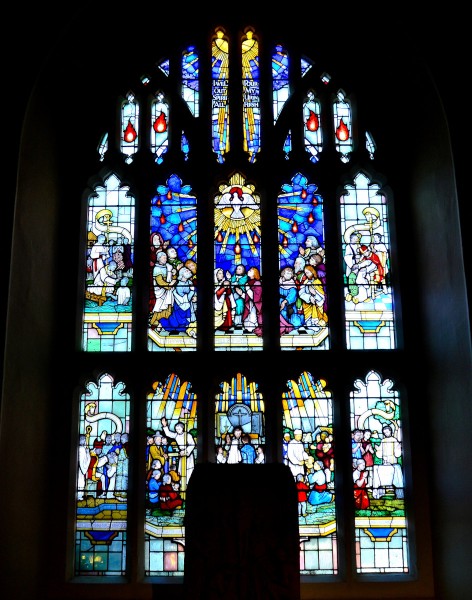 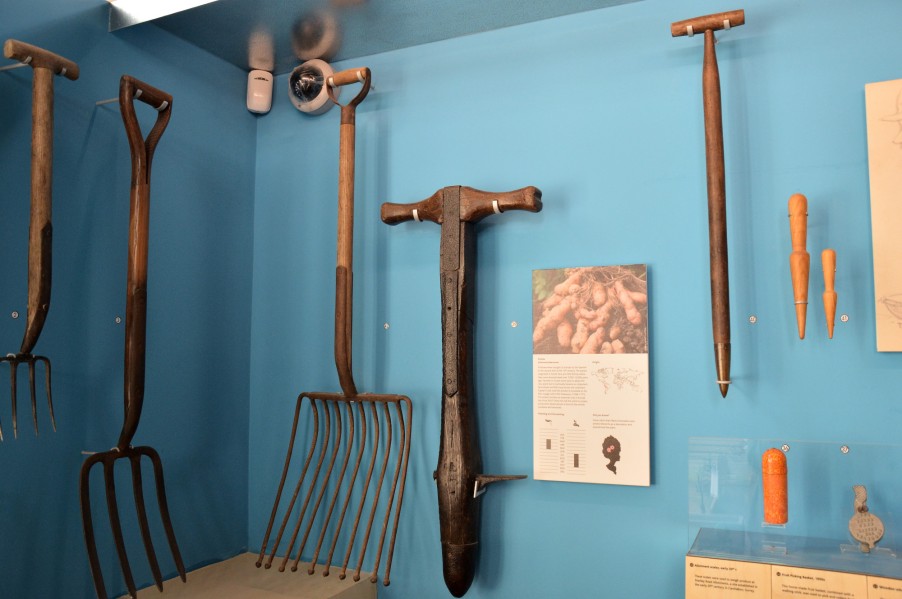 The potato, which has become an important food staple, was first brought to Europe from Peru by the Spanish in the latter part of the 16th century although Sir Walter Rayleigh is credited with bringing them to England a little later.  In Britain we refer to the potato chip as a crisp and the British chip is a kind of thick french fry.  Fish and chips being our main contribution to international cuisine. 😀 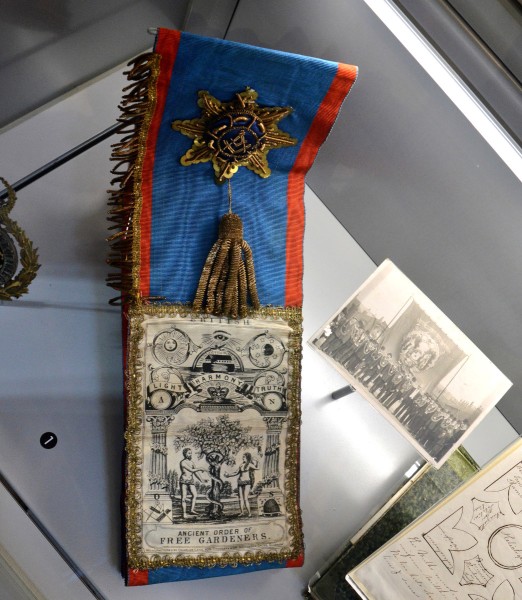 The Ancient Order of  Free Gardeners began in Scotland in the 17th century. The ancient order’s fortunes have been somewhat variable, more ⇒ .  Personally I think making people believe one’s services are for free is asking for trouble.  😀 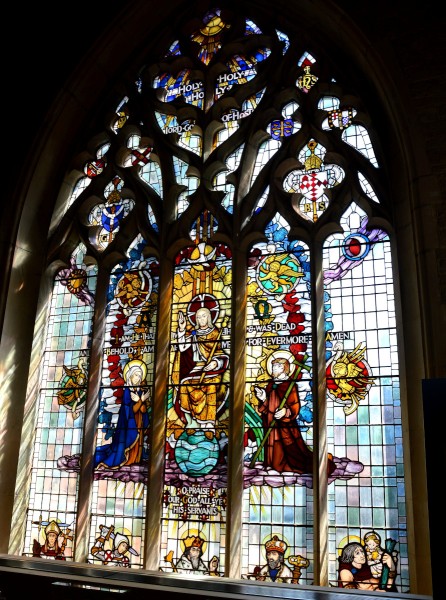 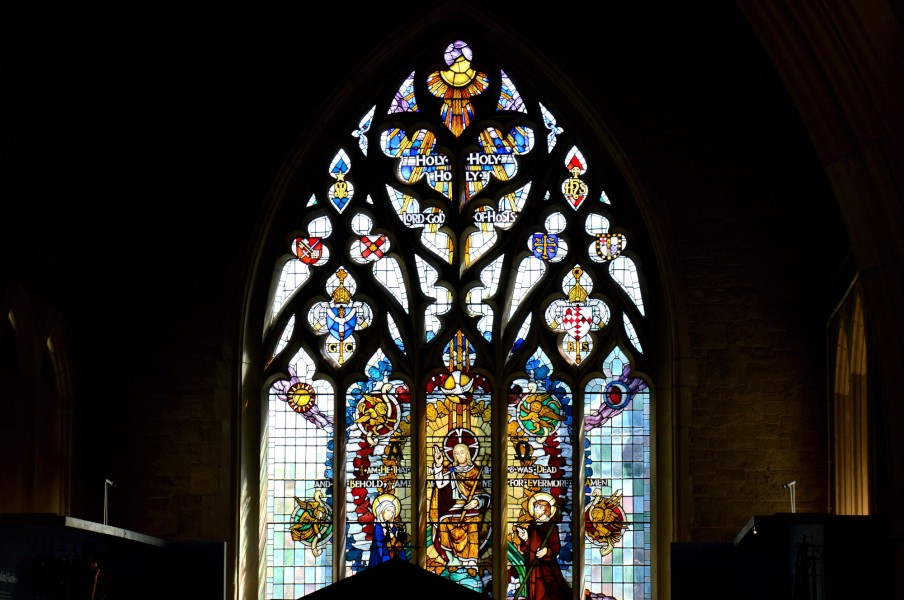 A good view of this window is difficult because somebody put a garden shed in the way. Really.  I think it’s an experiment in avant-garden 😀 .  I wrote them a note on the subject.   They haven’t written back. 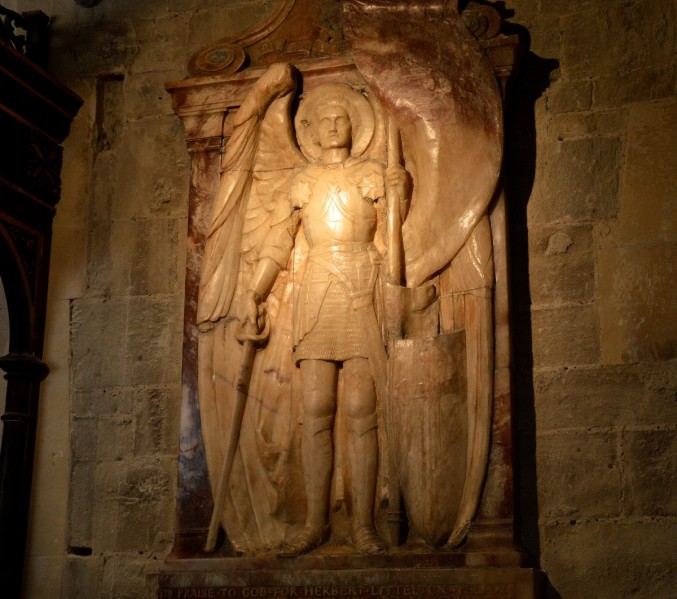 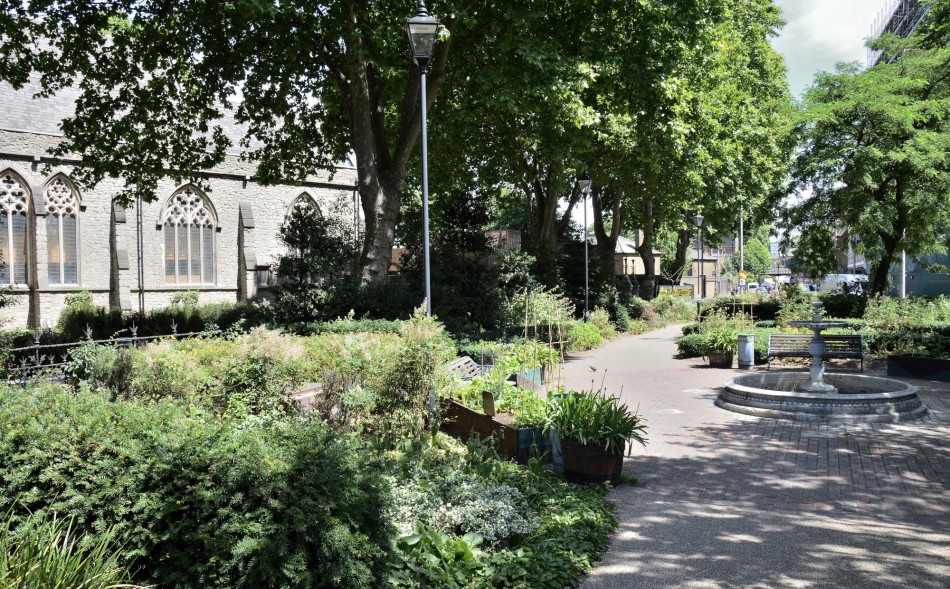 Although close to a busy thoroughfare and still a work in progress, the garden is free and a pleasant place to sit.  🙂

St Dunstans in the East 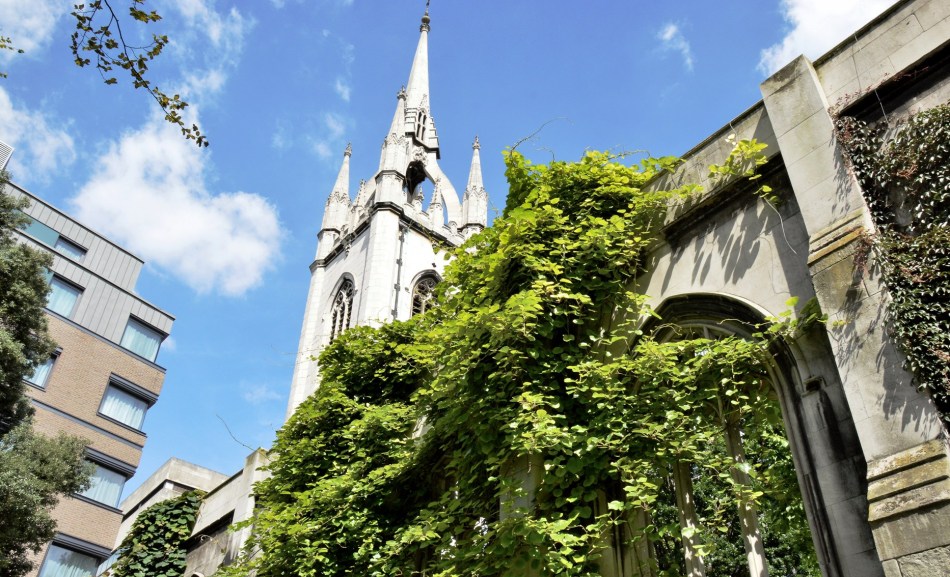 Along Great Tower Street, west of the Tower of London ⇐, past All Hallows by the Tower (AD 675)⇐, there is St Dunstans Hill and the church garden. The church was Originally built around 1100 AD, destroyed by the Great Fire of London (AD 1666) ⇒, rebuilt and then severely damaged during WWII. The garden is now a quiet oasis in a busy part of London. 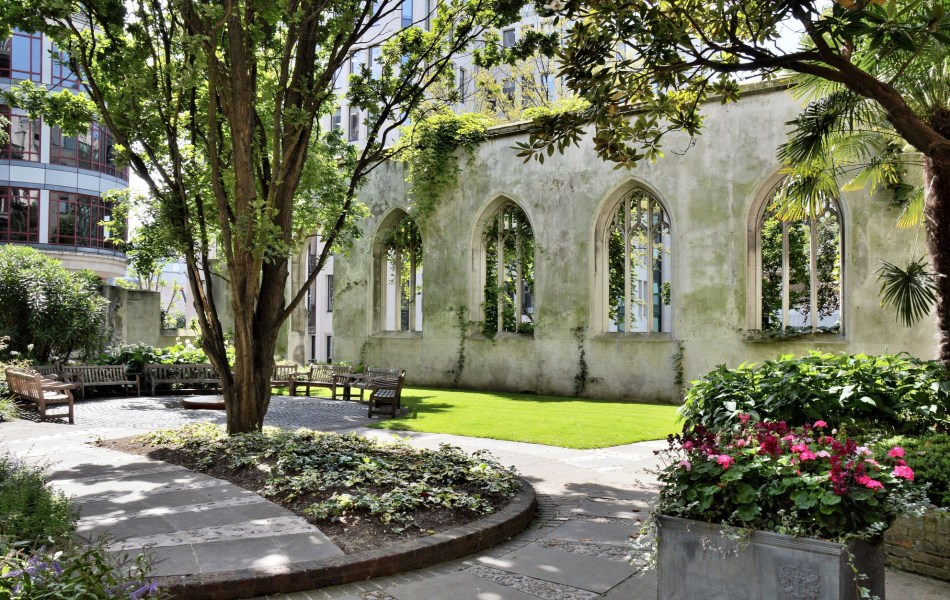 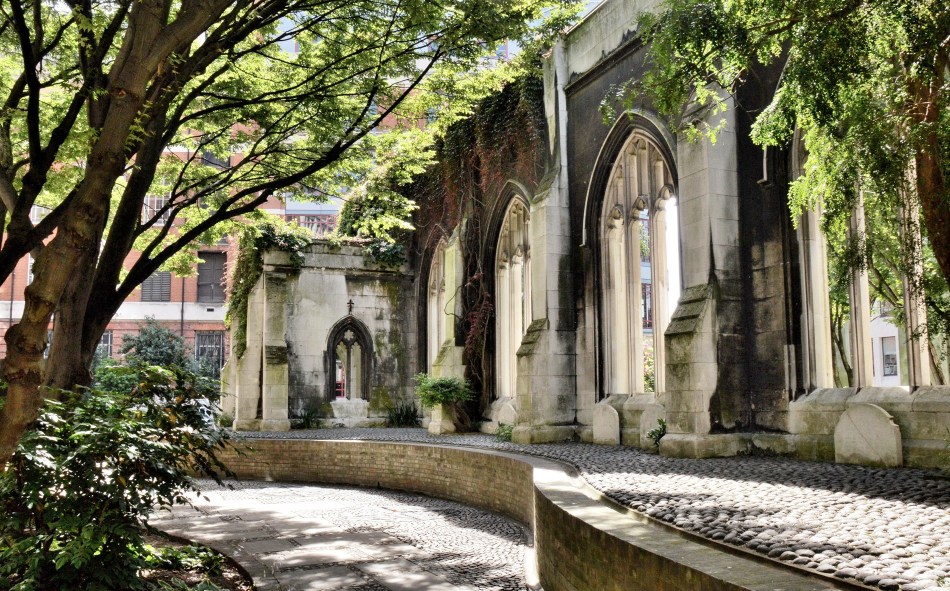 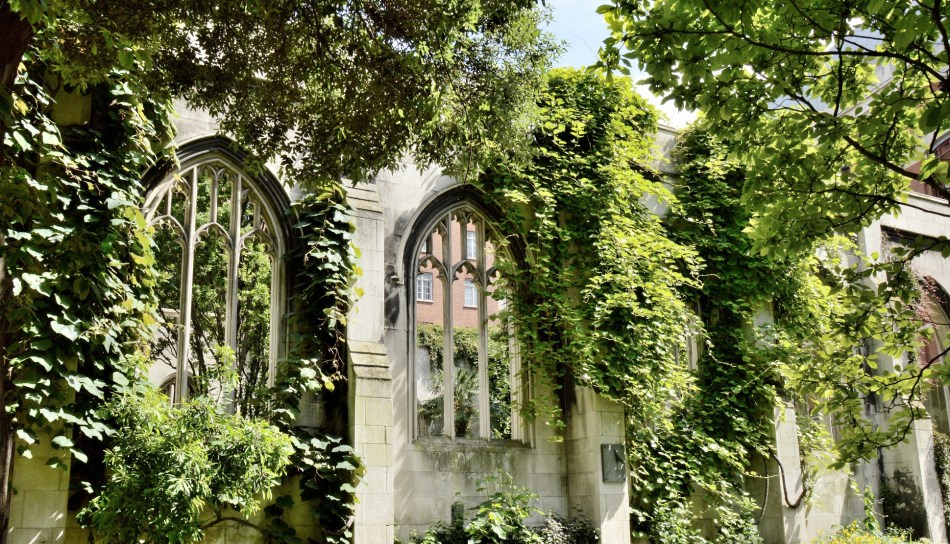 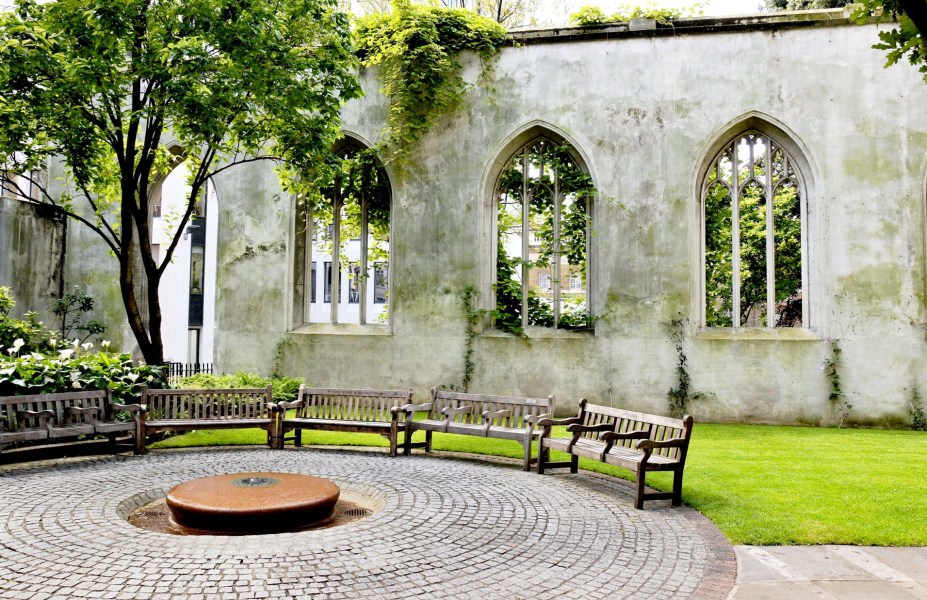 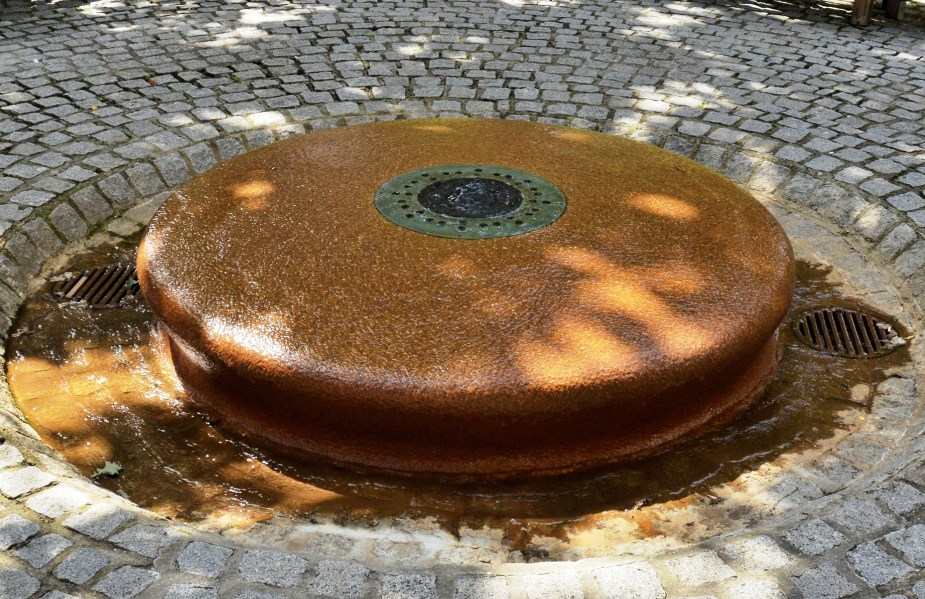 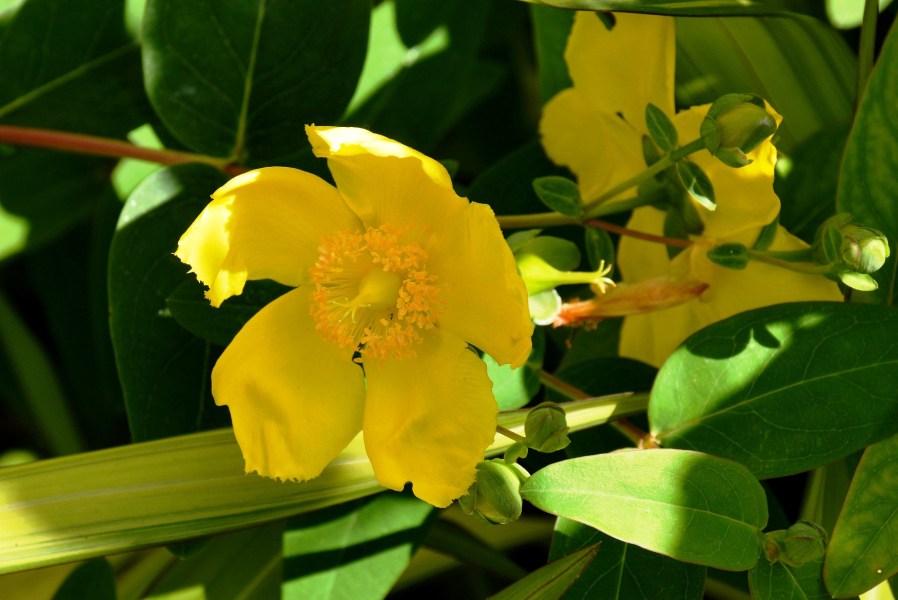 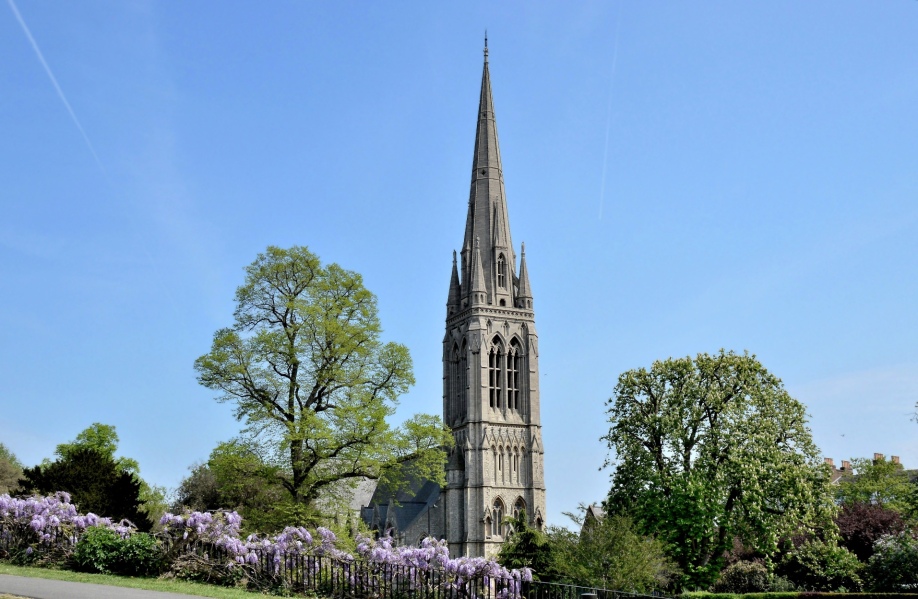 A view of the stunning St Mary’s Church⇒, designed by George Gilbert Scott, as seen from just inside Clissold Park⇐ at the eastern end. The church dates from 1858 and was built when the “Old” church (further down this page) was no longer adequate.   Inside the “New” church ⇓. 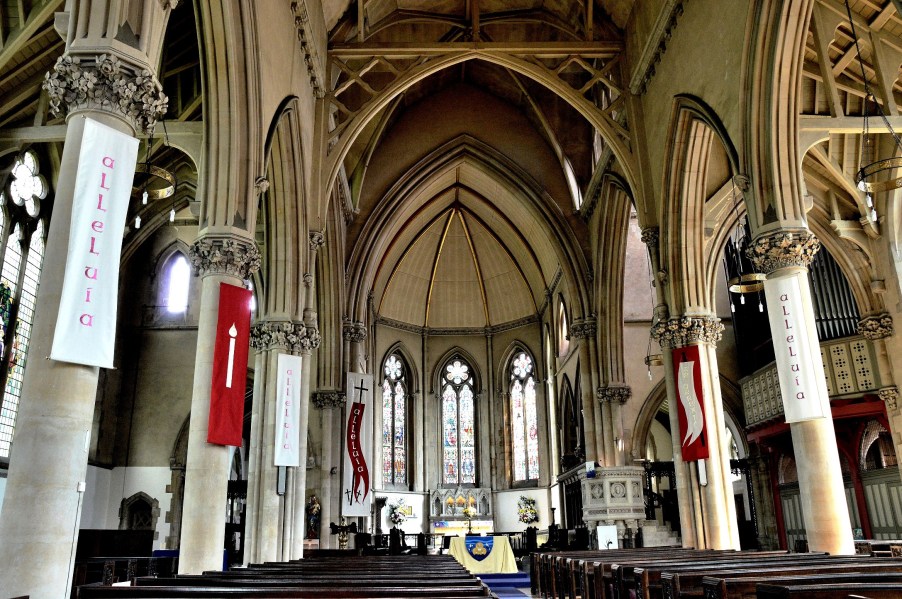 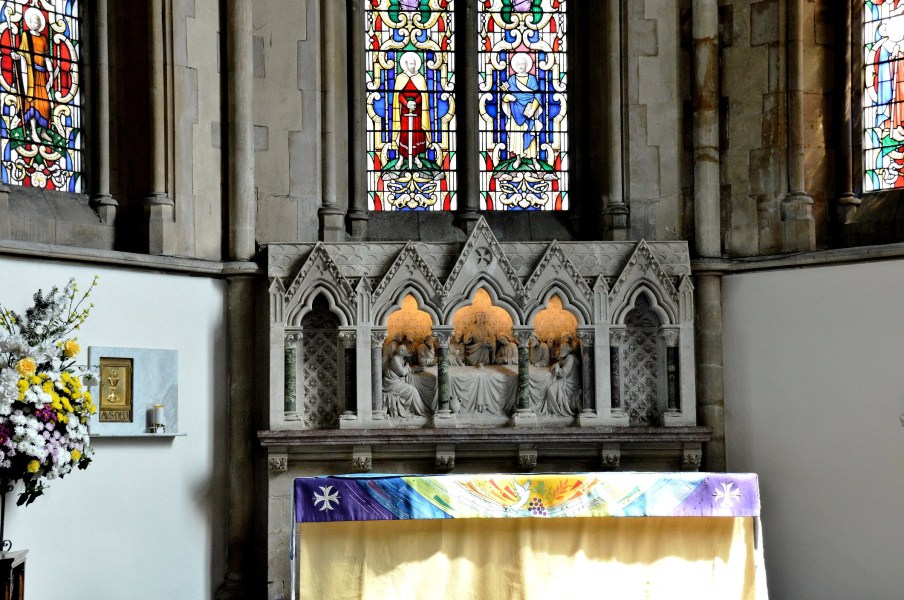 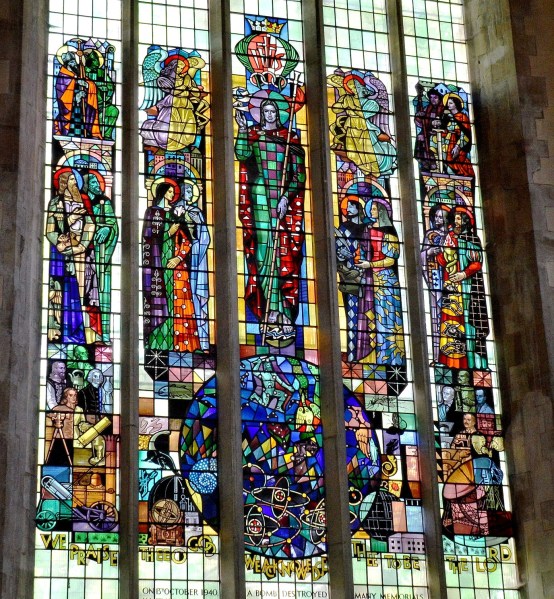 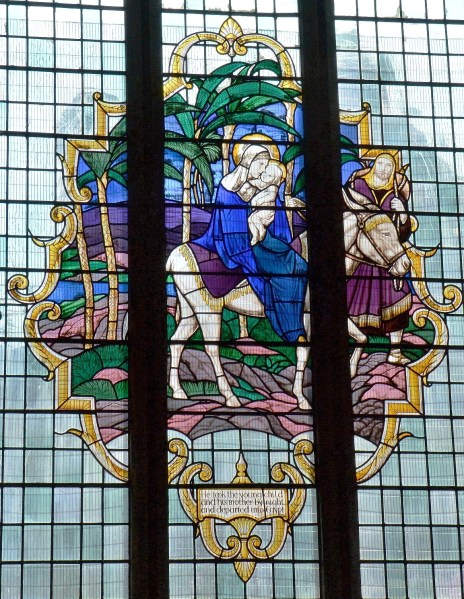 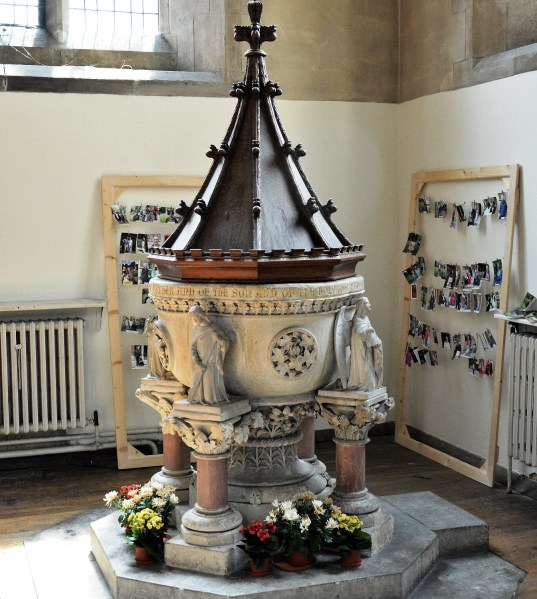 And, from the street ⇑.  Just to the left, on the nearer side of the street, is the old church ⇓. 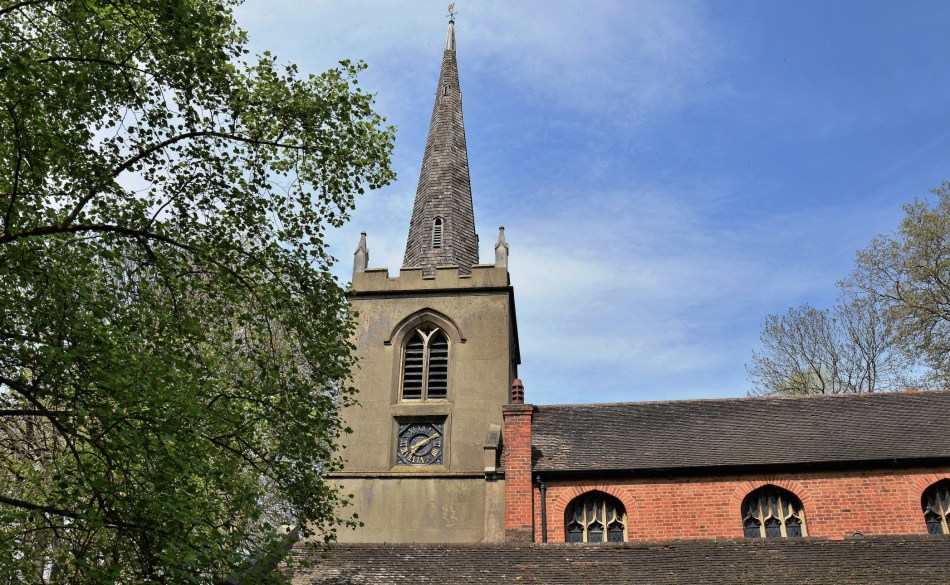 The old church site dates back to the early 14th century but was rebuilt during the 16th century.  This makes it the oldest Elizabethan church still in use in London.  It is also a venue for community events, artwork, music and for hire.  The website is here⇐.

Thanks for the visit and perhaps you would like the Clissold Park Goslings⇐.