Hatfield House and Elizabeth I

17 pics. Hatfield House is one of the most historically significant places to photograph near London and The Grounds ⇐,  Extraordinary Chickens ⇐,  Hatfield House Website ⇒.

Upon an autumn day being 27th November 1558 beside an oak tree near to Hatfield House which was her home at the time, Princess Elizabeth Tudor was told that she had become Queen Elizabeth I of England, following the death of her elder half-sister Queen Mary I.

Elizabeth’s accession had not been a certainty. Queen Mary I, also known as “Bloody Mary”, resented her own mother’s displacement as Henry VIII’s wife by Elizabeth’s mother Anne Boleyn. Queen Mary’s sobriquet stemmed from her attempt to return England to Catholicism by persecution of Protestants. Elizabeth was considered to have protestant leanings and likely to undo Mary’s efforts.

Fortunately Elizabeth was popular and had a number of powerful allies. Otherwise the whole future of Britain would have been changed and would have had a significant impact upon world history. Elizabeth’s reign of 44 years was known as a Golden Age with herself as “Gloriana” the virgin queen.

Portraits of Elizabeth started to include a variety of symbols which made them statements of intent and power and helped to establish the cult of Elizabeth. Here are two of them with some of the symbols explained, followed by images from within Hatfield House. 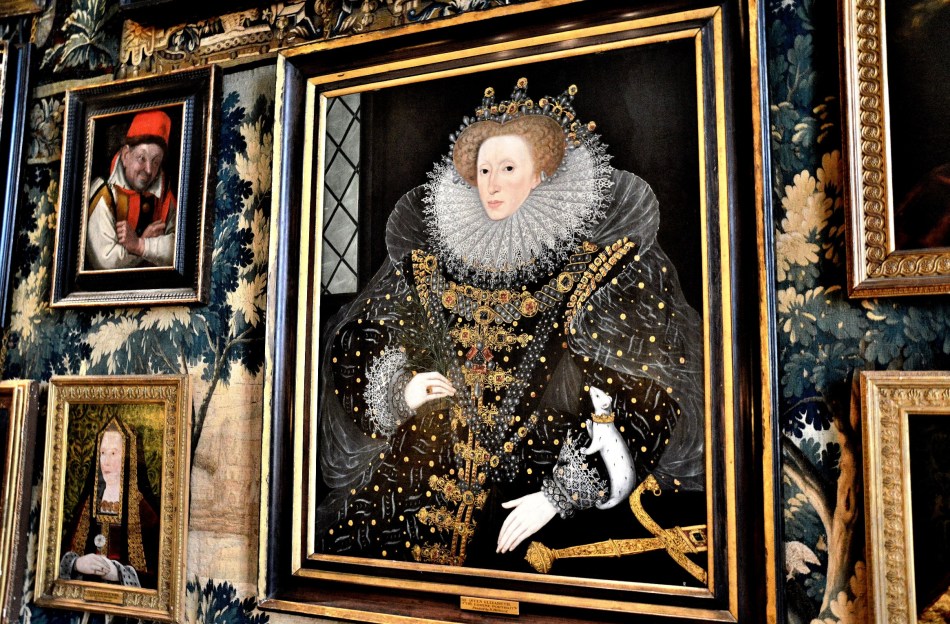 The Ermine Portrait shows Elizabeth holding an olive branch in her right hand signifying the offer of peace. Upon her left is an ermine wearing a crown as a collar and near her left hand the sword of state.

The ermine in the picture, with its black flecks, is a stylised version that indicates its heraldic significance that looks up to the queen.

An ermine is a stoat (short-tailed weasel) in its white winter coat. It represents purity and valour based upon an old legend that it would rather die than soil its white coat. Monarchs and peers had used the ermine to make cloaks. With several of the pelts sown together, the black tipped tails created a pattern of dark flecks. This then became an heraldic device of black flecks upon white.

Taken overall the message is that whilst Elizabeth offered peace, she was ready to use the sword, limited only by righteous regal purity. 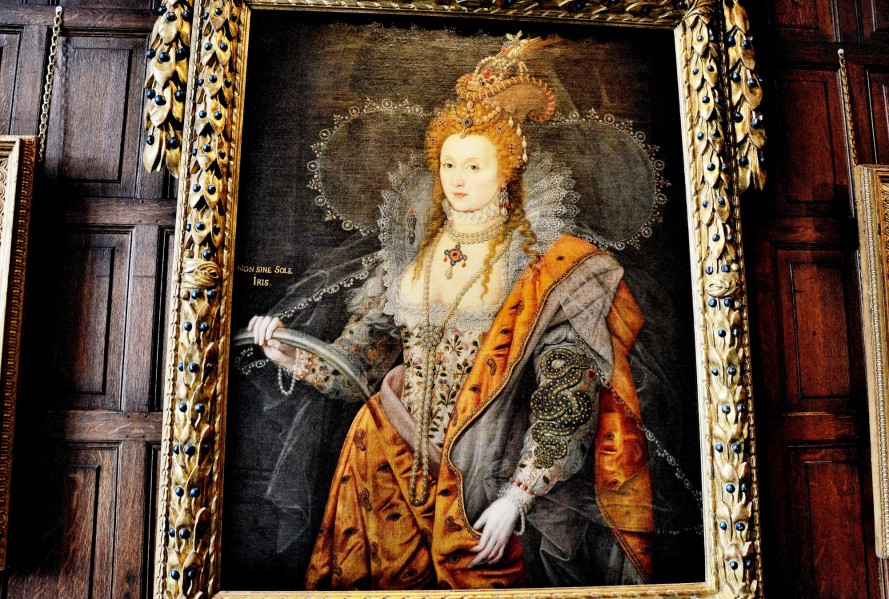 The Rainbow Portrait includes the Latin phrase “Non Sine Sole Iris” (No Rainbow Without Sun). Although in the last year of her reign, Elizabeth is depicted in her prime with flowery symbols of spring on her dress.

The dress is protected by a cloak that has eyes and ears both inside and outside. There is also a serpent on her arm that represents subtle wisdom and a powerful bite.

The rainbow in her right hand seems to have no colour. I have not found a commentator who explains this but does seem to be of significance.

Taken altogether this is Elizabeth as the source of nature’s beauty and light protected by an ability to hear and see everything and to act upon that knowledge.

One of the famous Queen Elizabeth I Armada paintings can be seen at The Queen’s House ⇐ in Greenwich.

There have been many films depicting Elizabeth’s very dramatic life. My personal favourites are the 1998 film “Elizabeth” and the 2007 film “Elizabeth: The Golden Age” both starring Cate Blanchett and, I think, definitely worth seeing.

And, here is the house:- 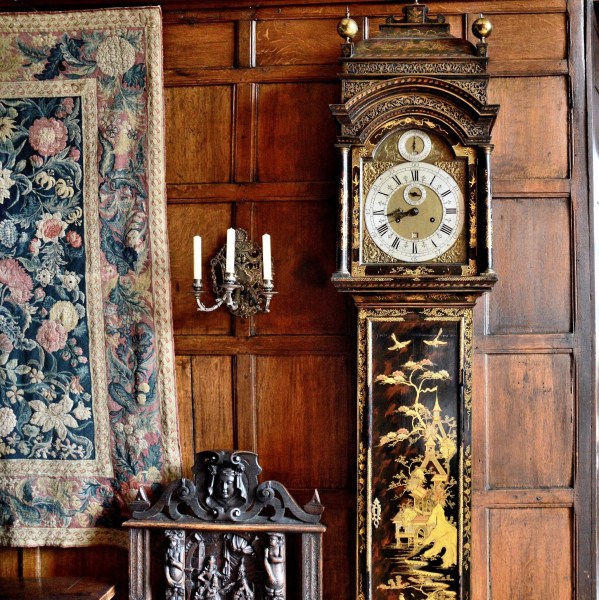 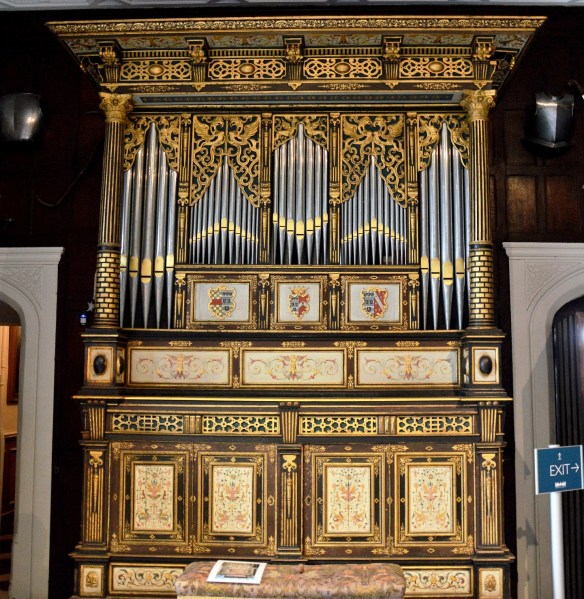 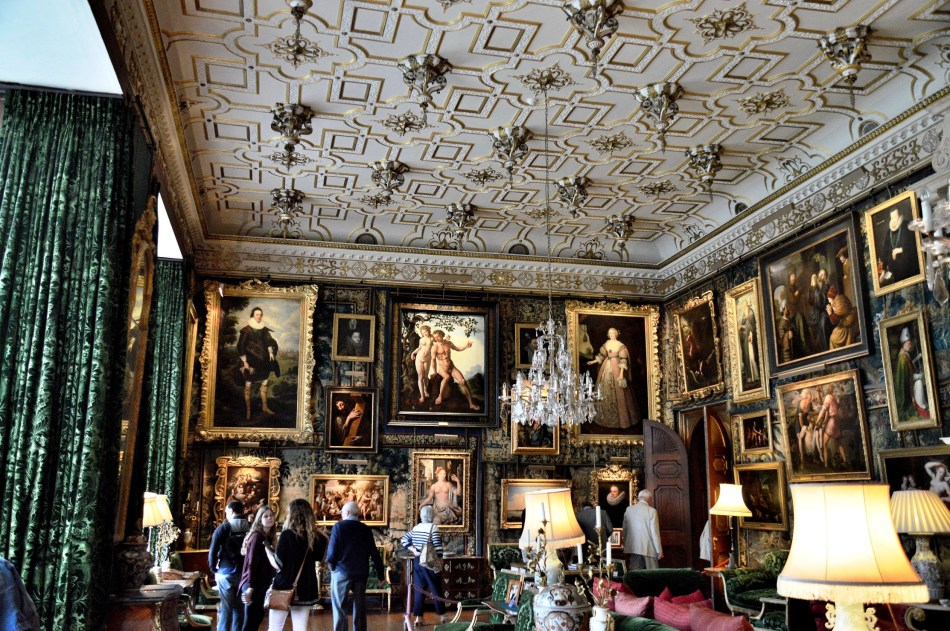 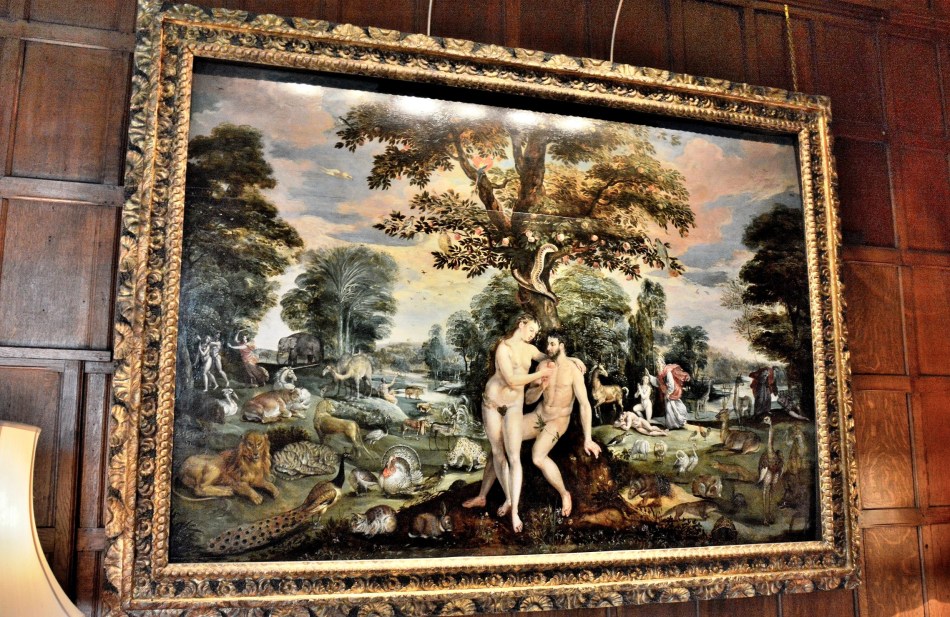 There are a great many works of art in Hatfield House, this one took my interest because it shows that artists of the past had some curious notions or tried to create them.  In this picture of Eden there are people other than Adam and Eve and some of the animals are transparent.  Click on twice for a closer view.

This painting of Cicely Alice (Marchioness of Salisbury) was painted about 1910.  I found it to be somewhat enigmatic.  Whilst I could not find any cause for it, if you click on twice to expand, it looks as if she is about to burst into tears.

More from the grounds ⇐.

For more than 1,400 years, a Cathedral dedicated to St Paul has stood at the highest point in the City of London. The present cathedral was designed by Sir Christopher Wren and built during the period 1675 and 1710.   More History ⇒.

Photography is not usually allowed except on a few days each year or with a permit.  The few visitor date/times/charges for photography without a permit during 2017 are here ⇐.  For permits and commercial photography/filming, please see here ⇒ .  General Admission and charges are here ⇒.

I caught the last opportunity for 2015 and so, of course, went overboard. To view the astonishing detail of the decor, please click on the image and then again to expand.

Beside the Dome and the Dome

The gallery at the first level is known as the Whispering Gallery at 30 meters above the cathedral floor.   So called because, when it is quiet, a whisper on one side will travel around the wall and be heard on the other side.

Higher still is the Stone Gallery at 53 meters and the topmost is the Golden Gallery at 85 meters.  If you can climb to the top, they give a you a badge.  😛 .

The Ceiling above the Quire 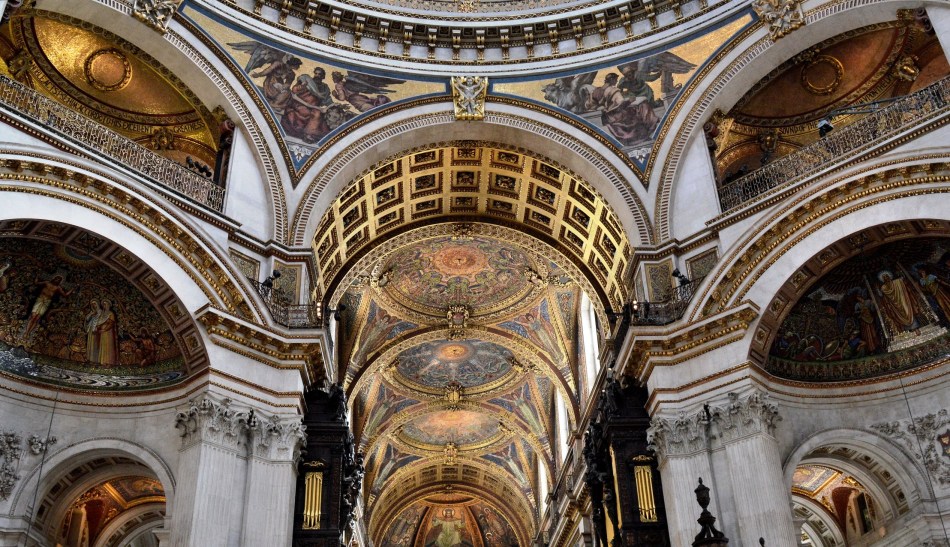 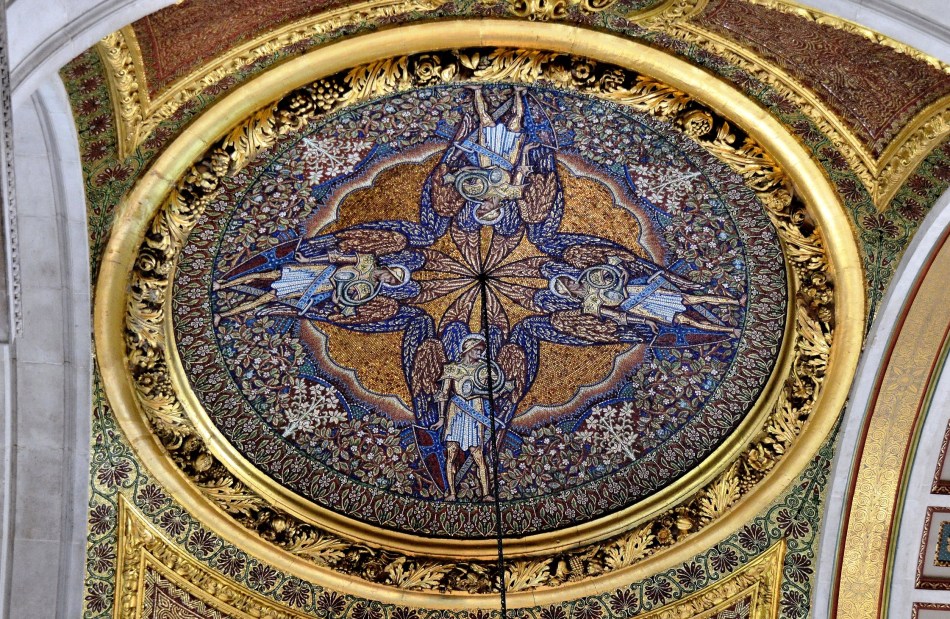 The High Alter and the Apse

There are many monuments and dedications at the cathedral.  I chose this one because of the workmanship and for being a little known personage.  It is of course Carolus Jacobus Blomfield.

Here is the famous exterior of the Dome. 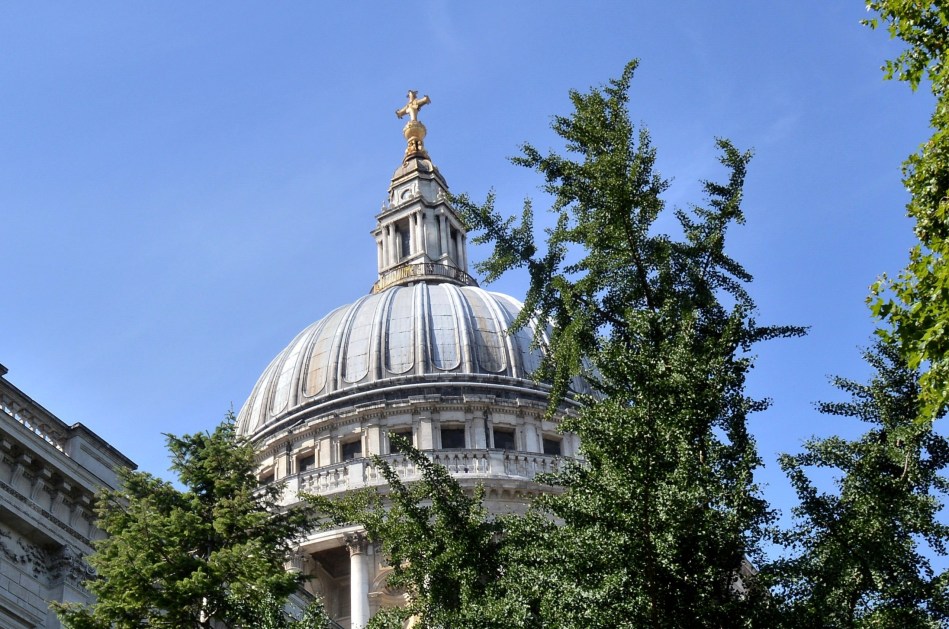 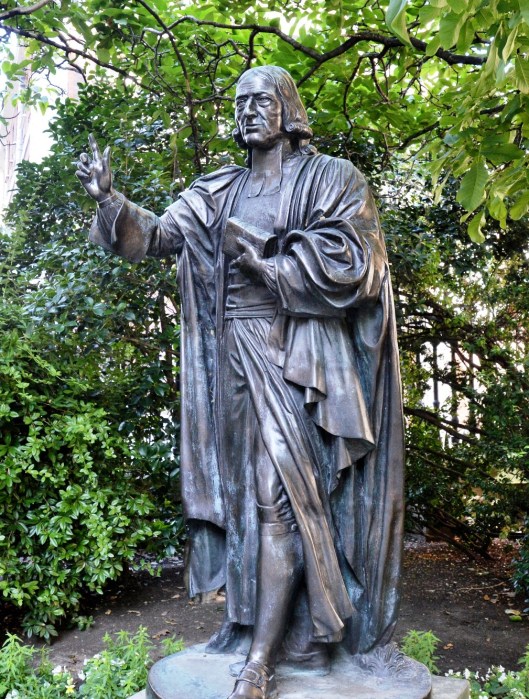 This is John Wesley, Father of Methodism.  Another well made statue.

The Crypt has many tombs, dedications and a cafe.  Perhaps the most famous tomb being that of Viscount Horatio Nelson.  These are some of the dedications. 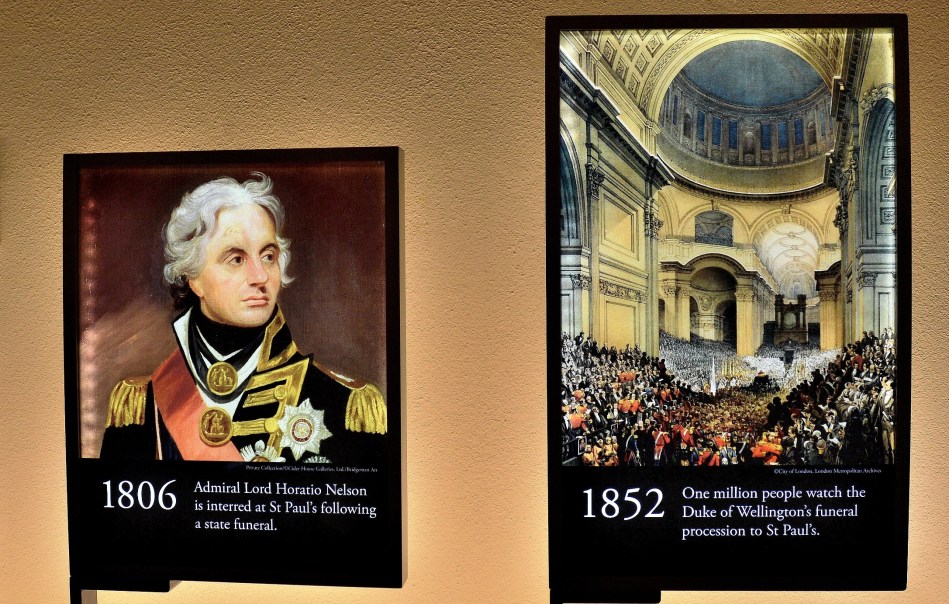 Lastly, the cathedral does have its contemporary side and has housed an exhibition of work by street artist Inkie.  Below is one item retained and presently on view just inside the cathedral entrance. 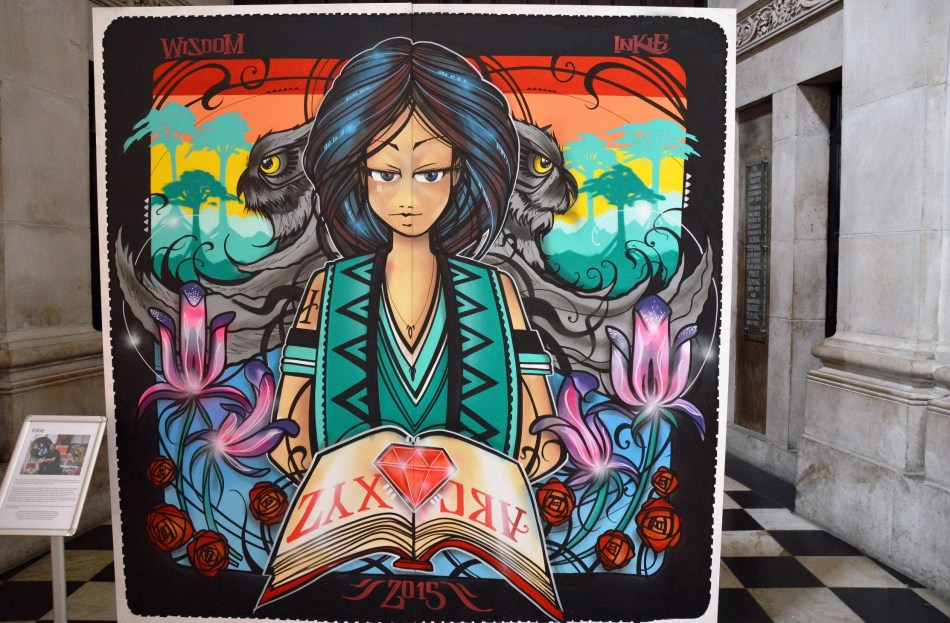