Lloyd Park is right behind the William Morris Gallery ⇐ which has a some outstanding exhibits.  Lloyd Park ⇒ has some pleasant lawns amongst trees and is surrounded by a very pretty moat.  Further down there is a quite beautiful mystery tune but I have no idea who created it.  First the moat.

At the far end is the Delice café and some more park with an art gallery (next time).  Meantime more of the moat.

Add a little whimsy and the mystery tune.

This tune has been passed around for years but nobody knows who created it or where it came from.  So, if anybody can identify it, I would be grateful.   Meantime it is beautiful, calming and very suited to the pictures. 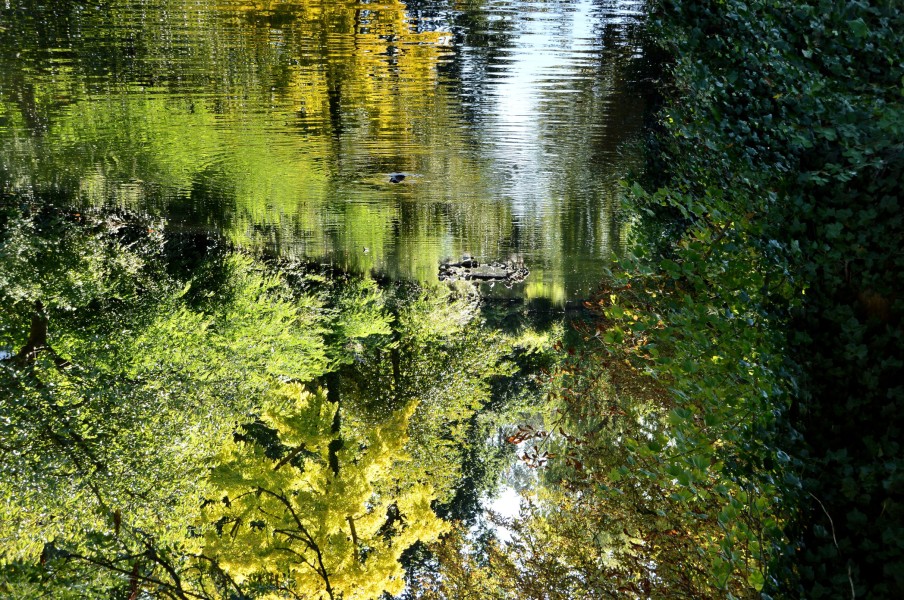 Well hello and welcome to Ightham Mote, a pleasant idyll in Kent.  The interiors are presented as a walk through time including an extraordinary painting.  Views of the exterior and beautiful gardens and more information about this medieval manor house can be found here  ⇐.   But first, a little walk through time (although not necessarily in the right order 🙂 )  ~ 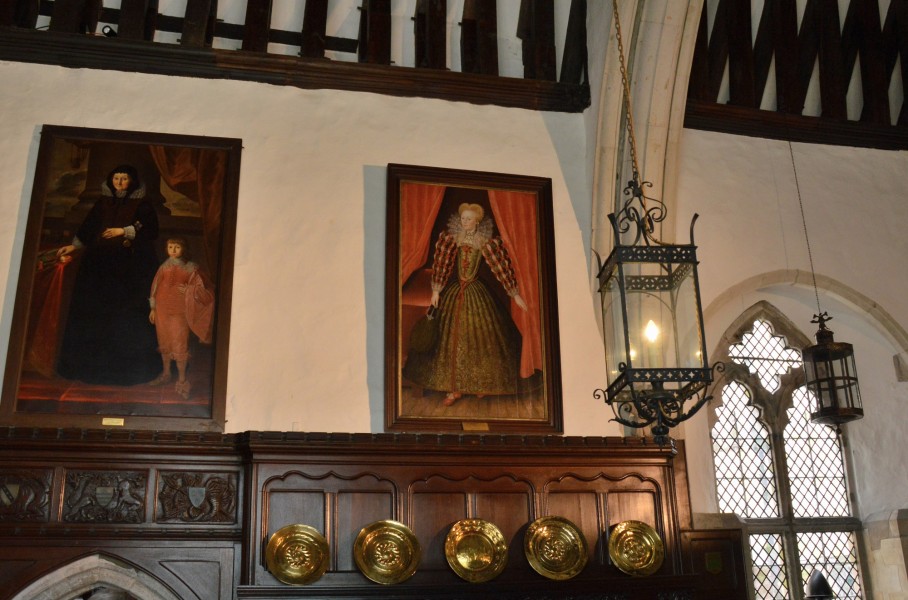 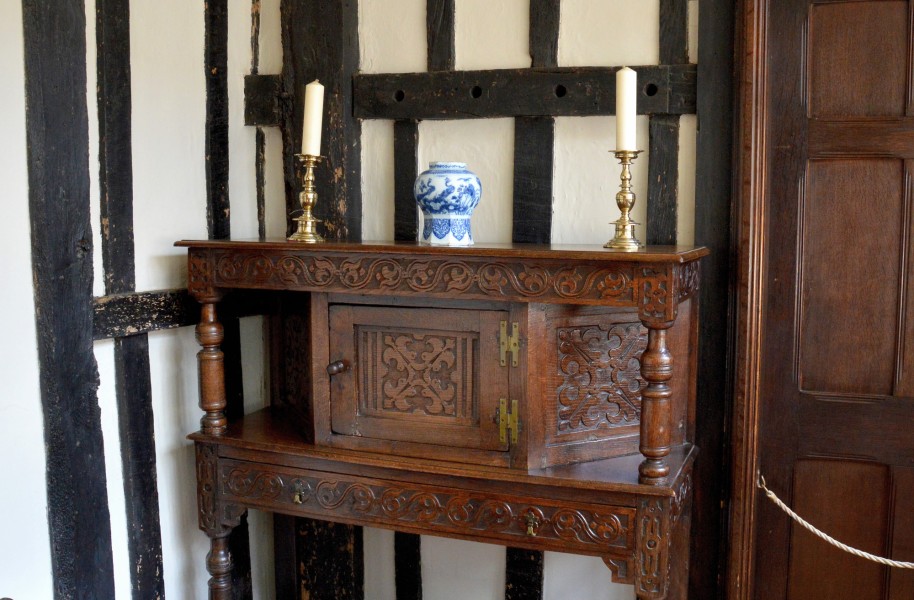 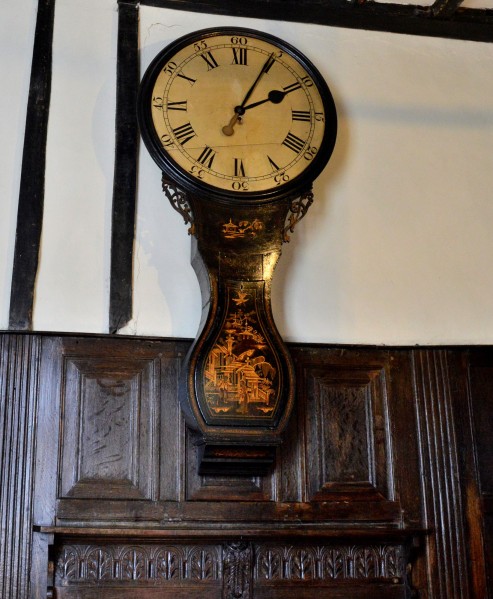 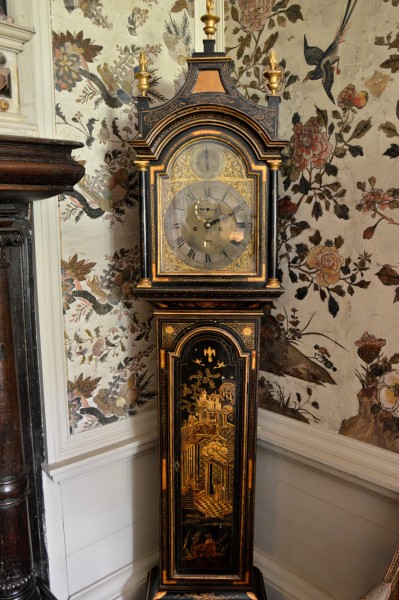 The above is a corner of the Billiard Room situated across the main courtyard.  Back to the main building :- 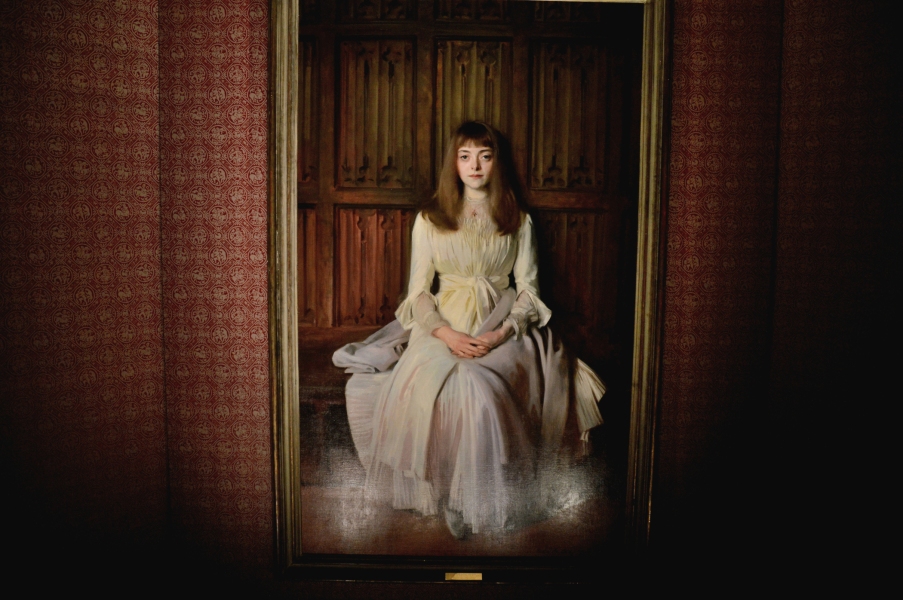 Thank you for the visit and if you missed the exterior views then you can find them  here ⇐ .

Ightham Mote (pron; I tham) is a well preserved medieval manor house that was built in the 14th century and is near to Sevenoaks in Kent. The approach is down into a wooded dell that is not at all dingily.

The manor house contains an interesting museum of artifacts from various eras (here  ⇐ ) and is surrounded by very pleasant gardens and an extensive array of footpaths throughout the surrounding area.  Ightham mote has never been inhabited by very ambitious people or involved in dramatic events.  Its gentle past is perhaps responsible for its very peaceful atmosphere and has made it a pleasure to visit.  🙂 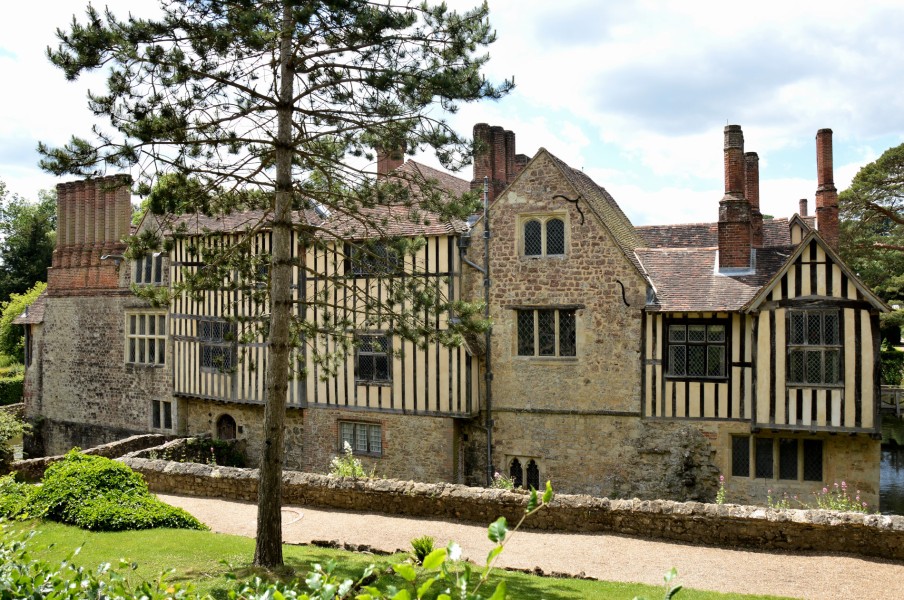 Across the bridge and into the courtyard. 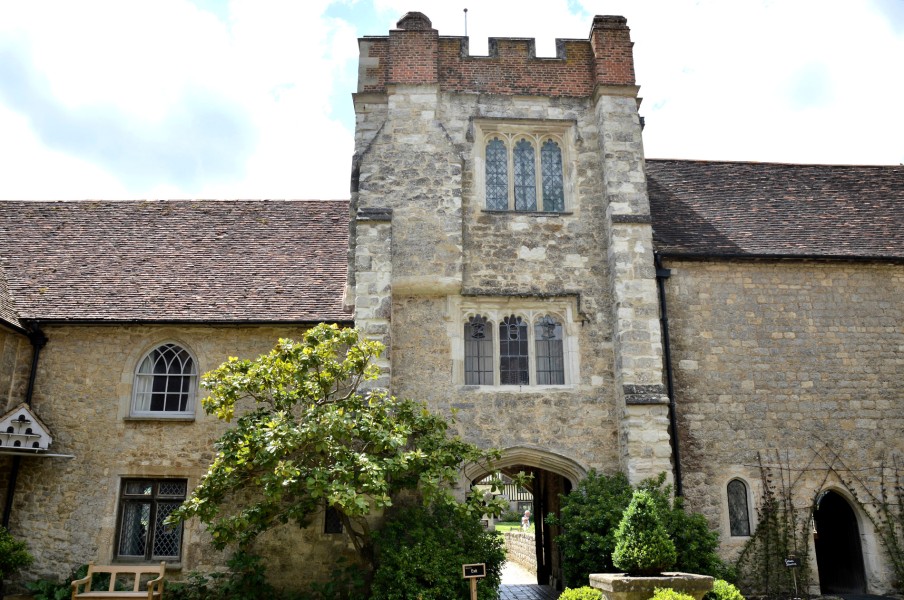 One enters the house under the rose covered arch.  Note the large dog kennel.  There is a picture of its inhabitant later.

Outside is just the beginning of the gardens and rural walks. Turn around and there are the stables.

Inside the stables there are a few pictures including one of the dog who inhabited the courtyard kennel.

There is an extraordinary painting inside the house ⇐ and I hope that you enjoyed your visit.

Windsor Castle From The West

The Changing of the Guard, access to St George’s Chapel, Queen Mary’s Dolls House  and   The State Rooms  and Semi-State Rooms ,the walkways and courtyards.  The key feature being the sumptuous State Rooms which includes a collection of fine porcelain, suits of armour, ancient armaments, works of art, a banqueting suite, chandeliers and so forth.  Photography is not allowed inside the buildings, but the Links give a good indication of what to expect.

Changing of the Guard

The Changing of the Guard proceeds from the barracks on the right of the aerial view (below) at 10:45 am.  It passes through the main gates and arrives in the lower castle courtyard at 11:00 am where the ceremony of the Changing of the Guard begins. At 11:15 the old guard leaves and proceeds back to the barracks.  They do this every day.    Times may vary and there may be some dates missed at Windsor.  Check  The procession can be viewed from the street or following admission to the Castle.

Admission to the Castle

The entrance is past the castle gate at the top of Castle Street,  just at the end of the row of trees.  If arriving at Windsor and Eton Central rail station, proceed up the shopping mall, turn right at the top and left at the statue of Queen Victoria.   Opening times and Prices.  Prices vary and can be cheaper earlier in the week so please check.

There is an airport style security station. After this a walkway leads to the central access point and then a U bend that brings one beside the large central turret, which has a garden where the moat used to be.  There is then a choice of continuing around the turret, through the Norman Arch and on to Queen Mary’s Dolls House and the State Rooms. Alternatively one can turn left and proceed towards St George’s Chapel and the parade ground where the guard change.   Exit is through the keep, back onto the road.

I was there on a Friday, just after the guard changed as where many others.  Consequently there where long queues for the Dolls House and State Rooms.   There are two queues, one for both attractions and one for the State Rooms only.  They queues were very much reduced by 1:30.   Taking lunch whilst waiting seemed like a good idea.  Be aware, open containers are not allowed inside any of the castle rooms. 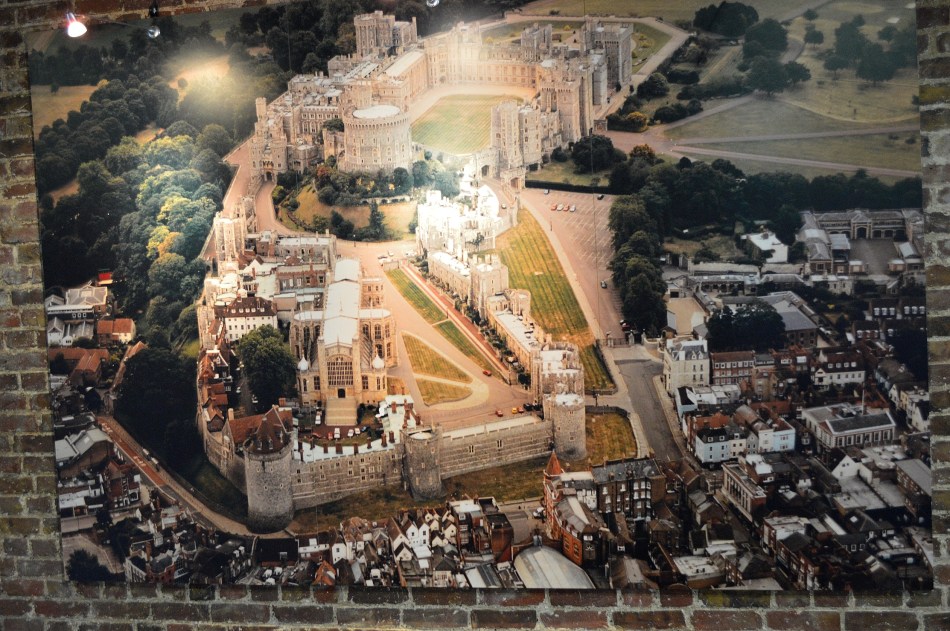 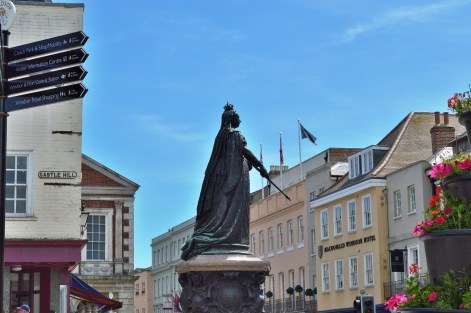 Here is the exit and a statue of Queen Victoria at the bottom of Castle Hill, just where the guard turn. I tried to get her best side. Honestly from the front she could sink ships.

This is one of the first sights and leads to the Moat garden.

Further around the old moat is a the Norman Gate.  These light fixtures can be seen in many places. 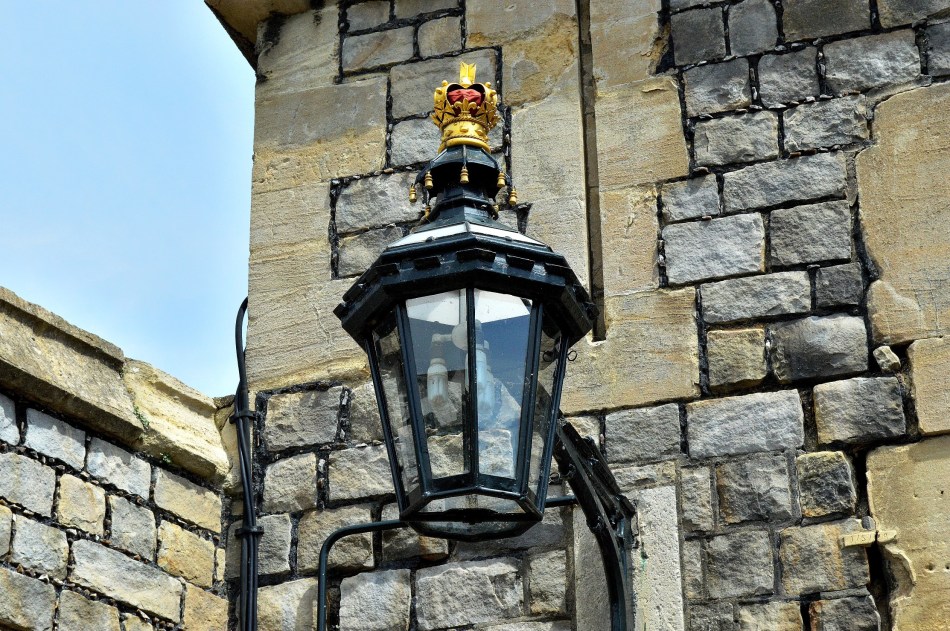 This is just outside the entrance to the Dolls House and State Rooms.  There are a row of benches and one can take a pew with a view.  This is a view of Eton College.  It was definitely worth waiting to see the State Rooms. Photographs are not allowed but you can get an idea by returning to the Links further up the page.

Back to the parade ground and the lonely sentry at the end. 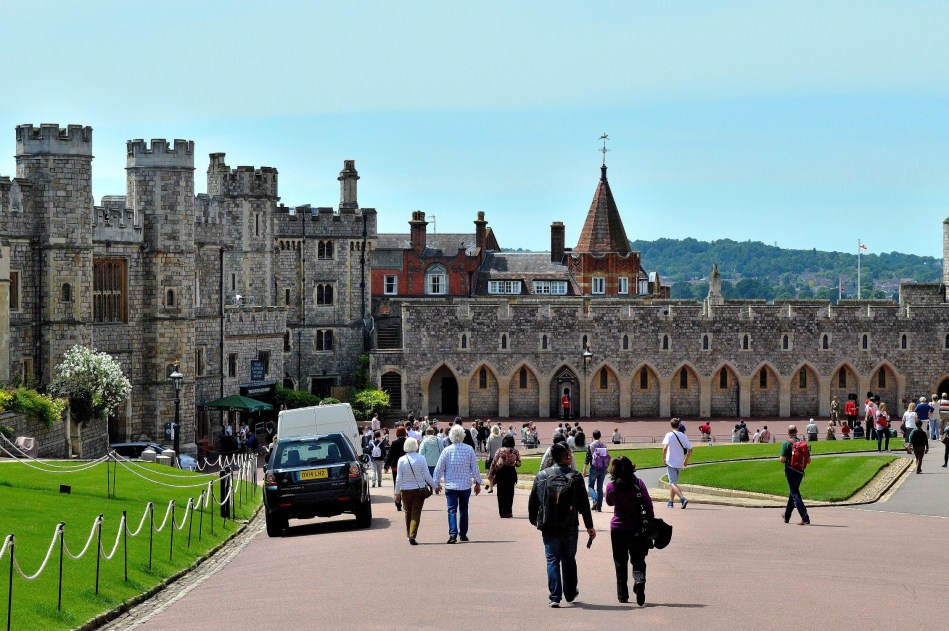 On the left there are some of the apartments. 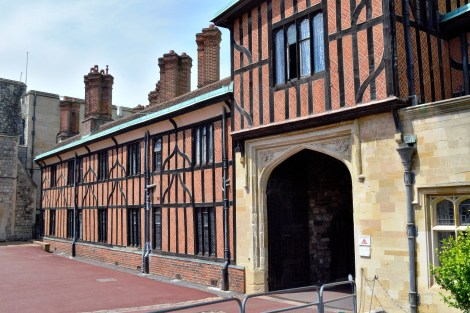 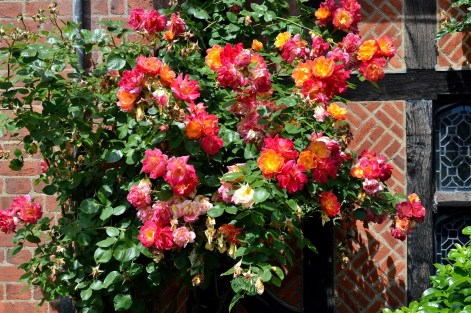 If you are lucky you will see a small group of guard about their business.  In fact you will hear them first.  British sergeant majors do very good impression of screaming eagles and have been known to cut hair with their voices.  The poor fellow on his own is not allowed to move even his eyes and not allowed to speak to anyone.  They draw tourists who photograph them constantly and have photographs taken beside them.  I think the sentries must have an off switch.

Turning to look back up the slope there is the entrance to St George’s Chapel. 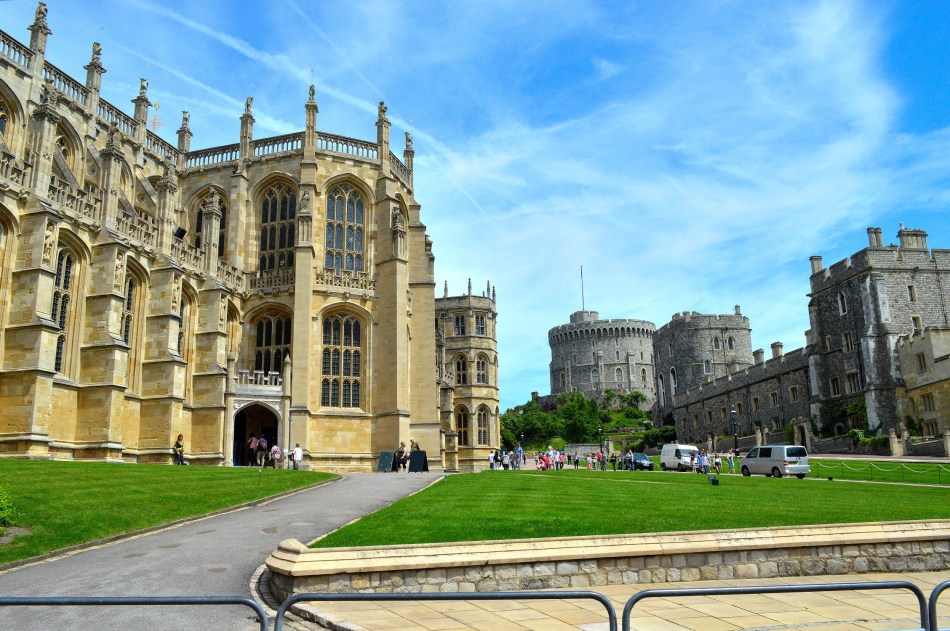 And, it’s always worth looking up.

Then out through the gate, directly opposite is a flower seller.  This street and the one to the right have several cafes and taverns.

I hope you enjoyed a glimpse and thank you for visiting. 🙂