The London Waterbus and Regents Canal 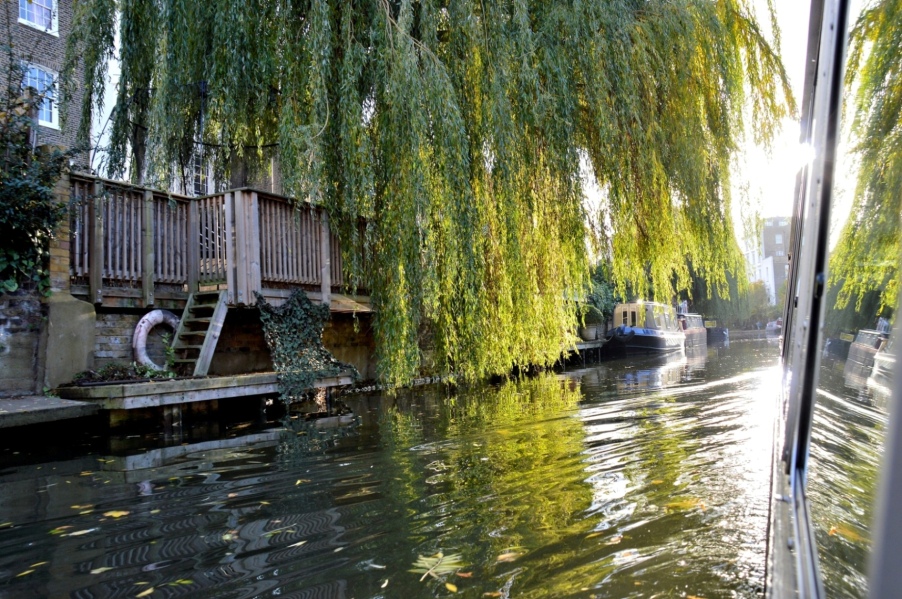 The London Waterbus operates between Camden Lock Market ⇐ and Little Venice on the Regents Canal.  The waterbus has a seasonal timetable ⇒ and the journey time is approximately 50 minutes. The Little Venice destination is a charming pool with a barge cafe and an enchanting barge puppet theatre ⇓.

The canal is part of a huge network that was once the lifeblood of trading Britain, moving goods and raw materials between ports and the hinterland by horse-drawn barge. Many of the old canals have been restored and now provide for house boats and holiday barges.  History ⇒ and scenic Barge Holidays ⇒ (one source) and the Norfolk Broads Holiday River Boats ⇒ (no canal locks).

Many canals have tunnels and this section of the Regents Canal has two. The longest UK tunnel of 3.24 miles is in the north of England at Standedge ⇒ (pronounced Stannige).  The long tunnels did not have towpaths and men had to lie on the cargo and push the barge along by walking along the roof or walls of the tunnel (called legging).  Professional leggers were available at one shilling per hour and the Standedge tunnel would take a back-breaking three hours to traverse with a fully laden barge.

Here are just a few snaps from the London Waterbus journey. 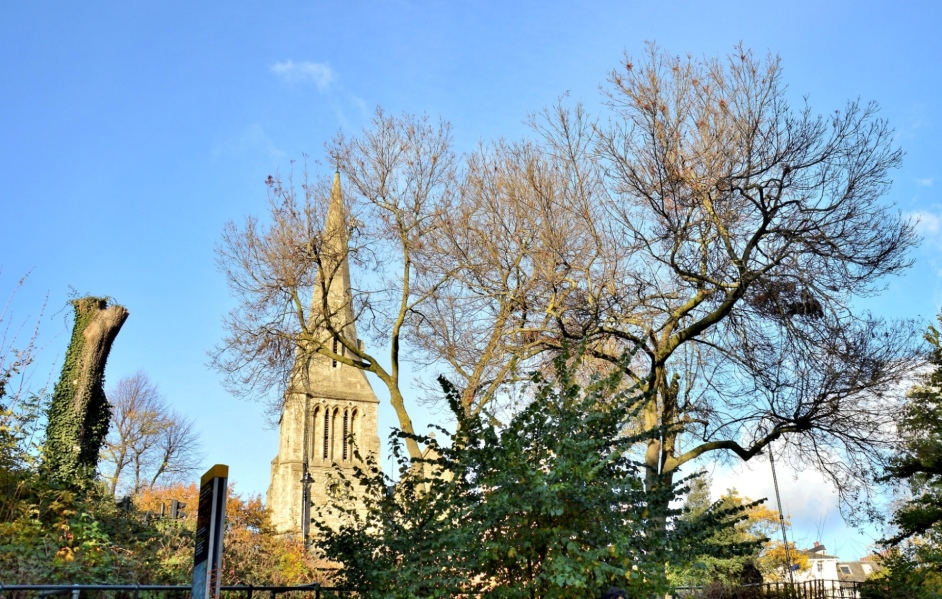 Starting from a small cut just past the lock at Camden Market the waterbus passes St Martin’s Church and then some pleasant foilage. 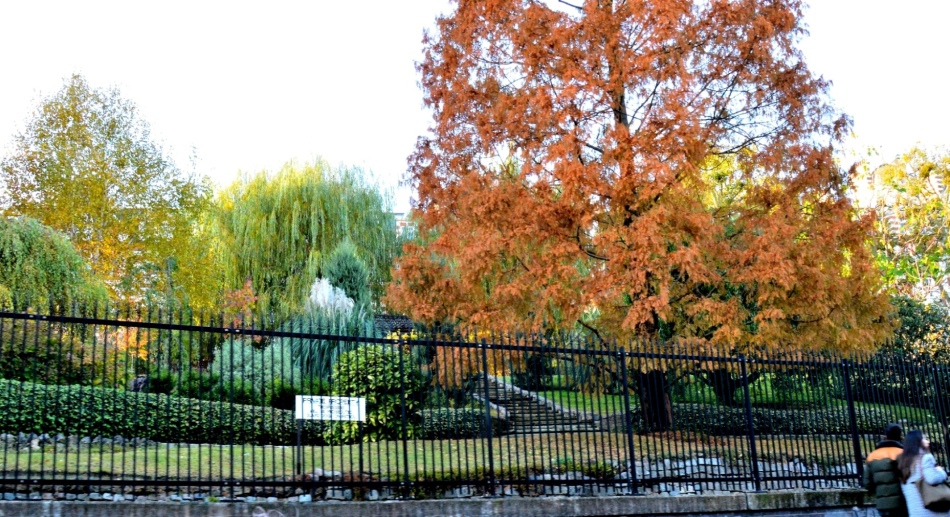 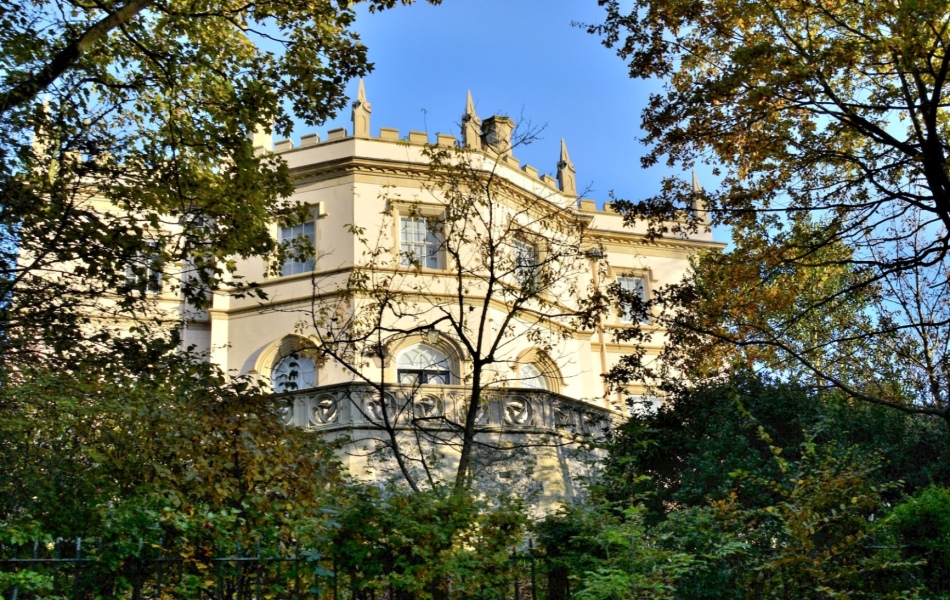 Then there are several embassies. 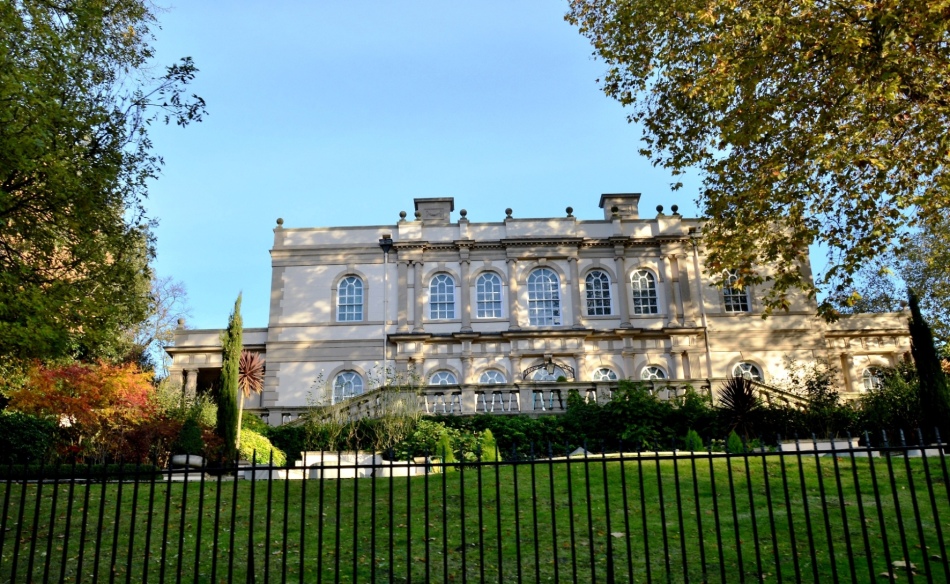 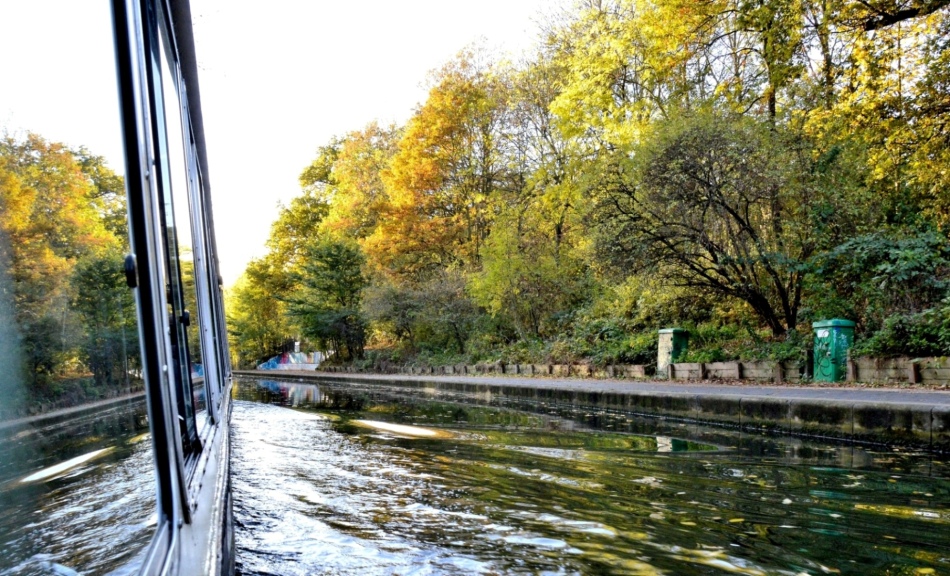 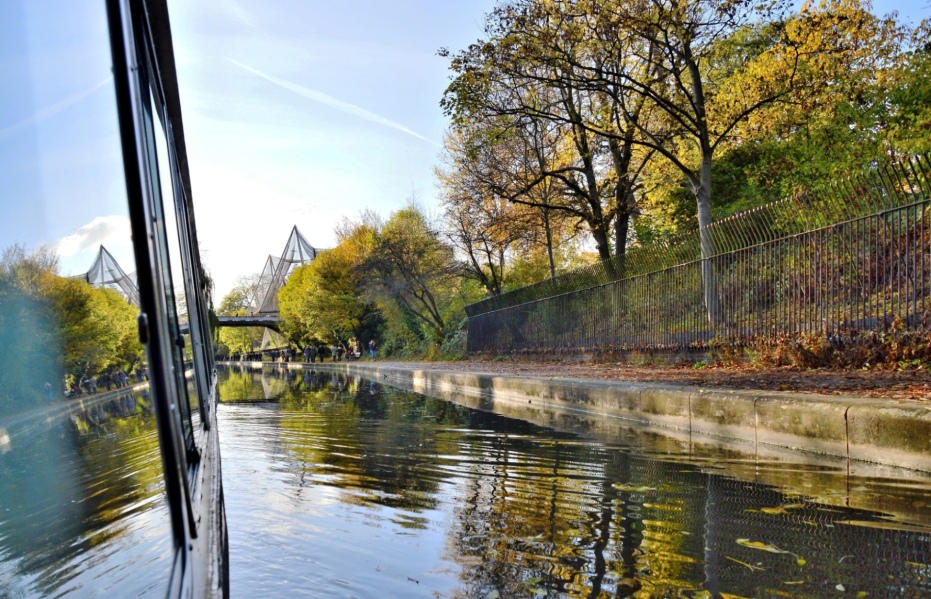 The route passes through Regents Park (London) Zoo, although all that can be seen from the canal is the giant aviary. 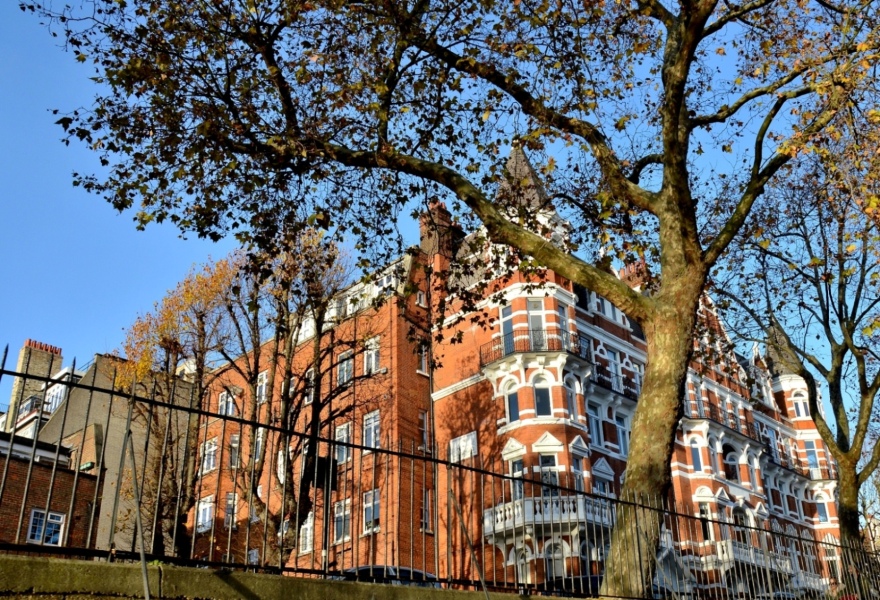 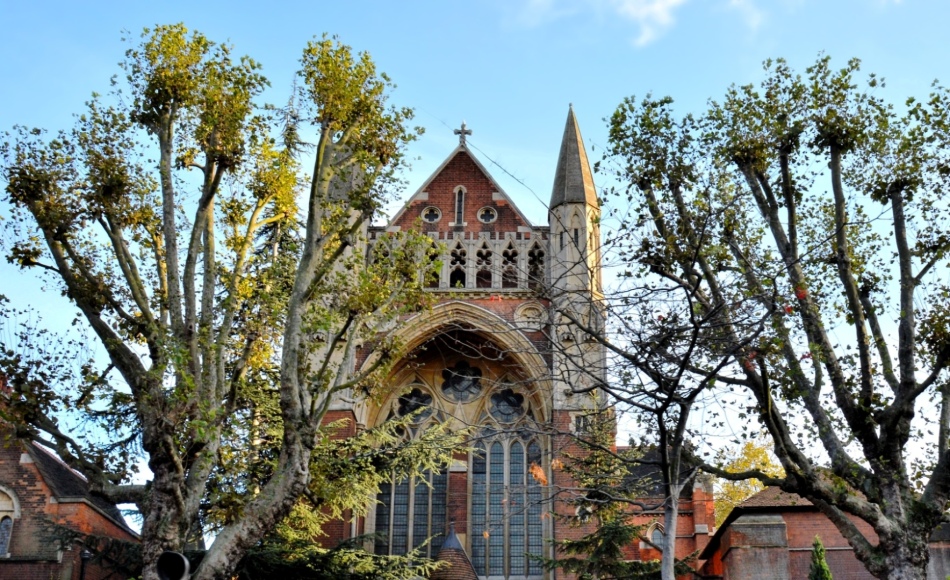 One of the few remaining Catholic Apostolic Churches (Maida Vale).  A curious religious movement which was founded by three self appointed apostles in England in 1831 and spread to Germany and USA.  The church ceased ordination in 1901 and so became virtually extinct by the 1970’s. 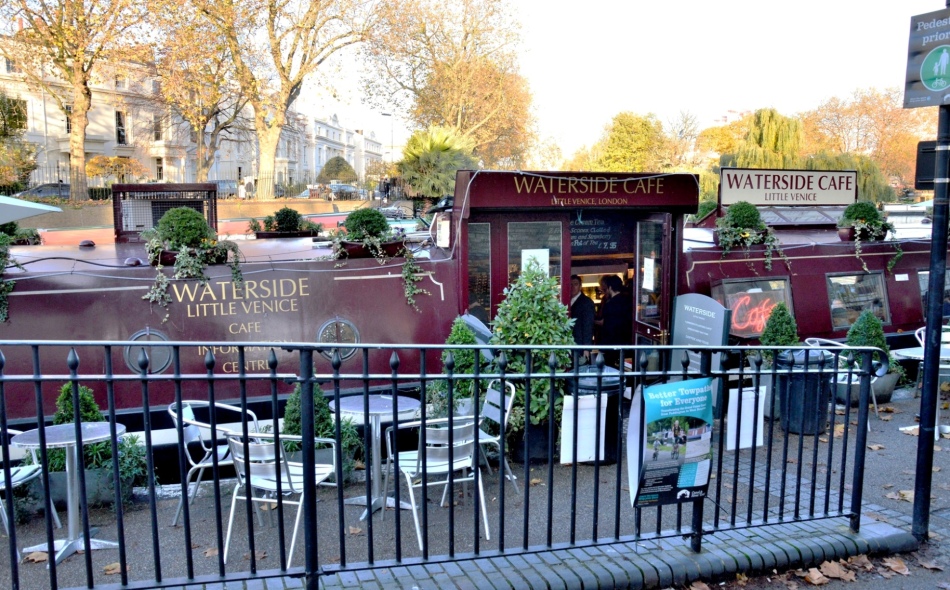 Arriving at Little Venice there is the barge cafe. 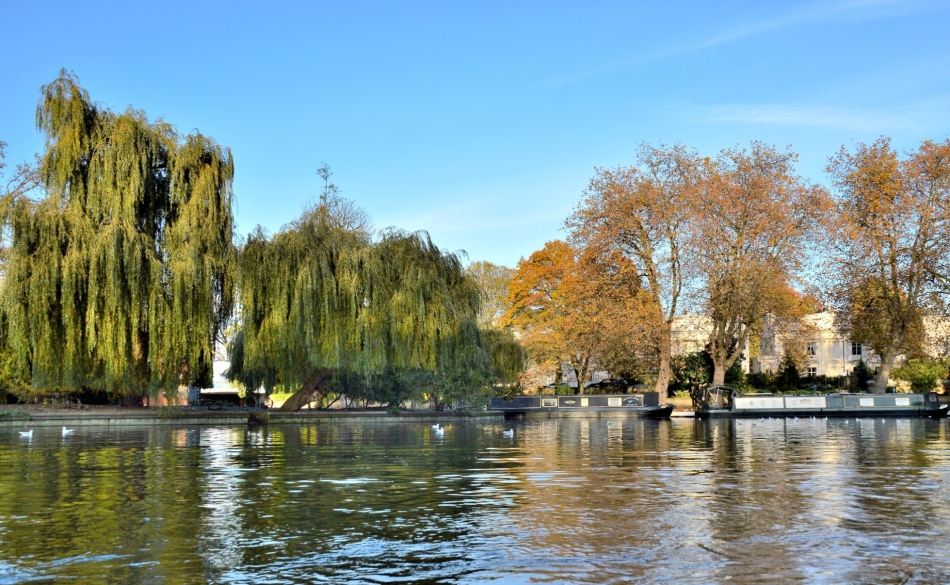 And, a fine view back across the pool. 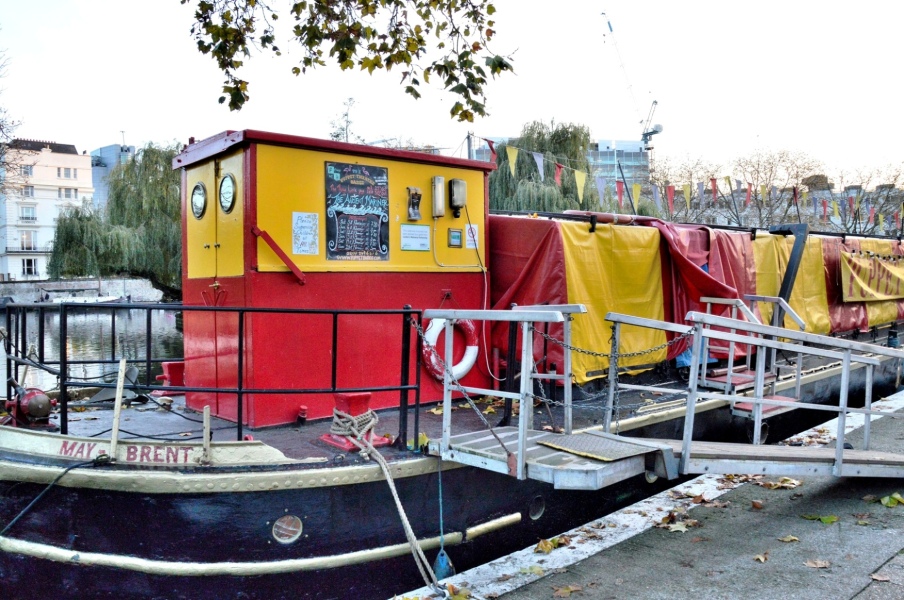 On the other side of the Little Venice pool is the Puppet Theatre Barge ⇒, which magically appears from Richmond between October and the following July.  Whilst it may not look like much from the outside, the inside is warm and cosy and the performances are skillful and enchanting and usually suitable for a broad age range. 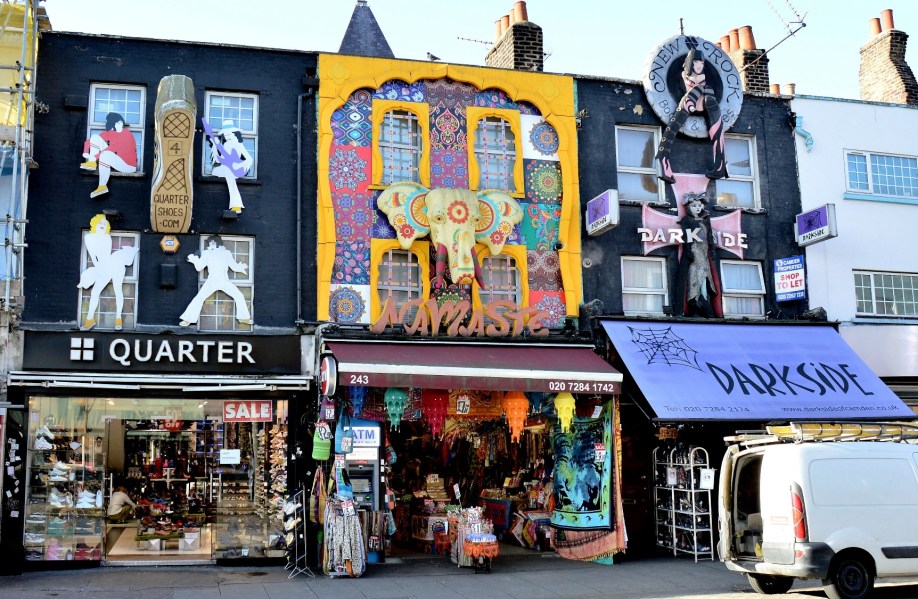 Imagine an Alladin’s cave within a cornucopia fed by a horn of plenty.  In the Camden Markets one can find eatables, wearables, carryables, sparklies, wall and ceiling hangables, film cameras and magical hidden caves of delight.

If you intend any serious shopping then print a large Google map of the market area north of Camden Lock and another south of the lock. That way you can retrace your steps to the best bargains.  There are some overpriced items and Camden is very busy at the weekends so buyer beware.  On the other hand there are some unique craft items.

To get there use London Underground Rail to Camden Town on the Northern Line.  There are two exits.  Use the one onto Camden High St and walk up the road with the main intersection at your back.

Camden Market is the smallest of the markets but is a bit bigger then it looks. 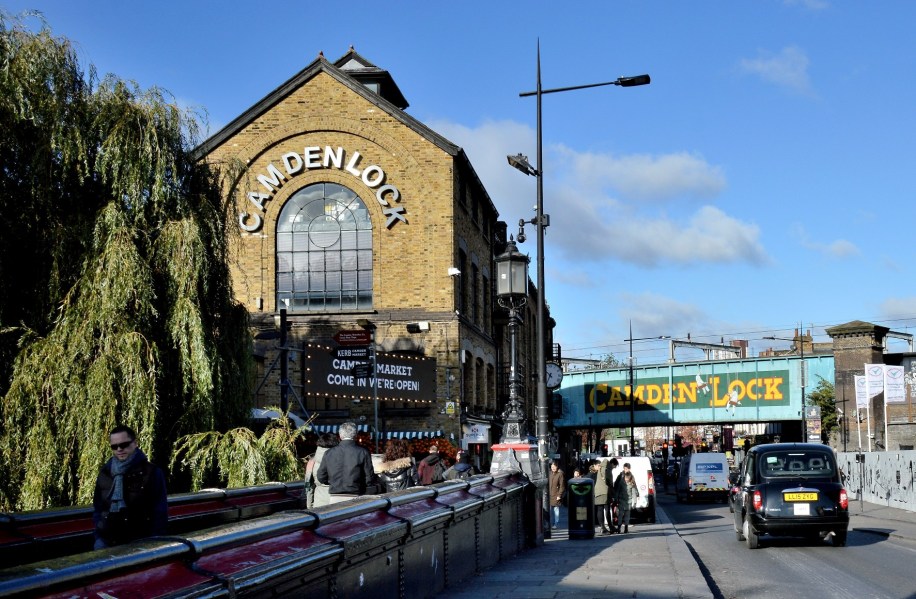 Camden Lock Market is a lot bigger than it looks. 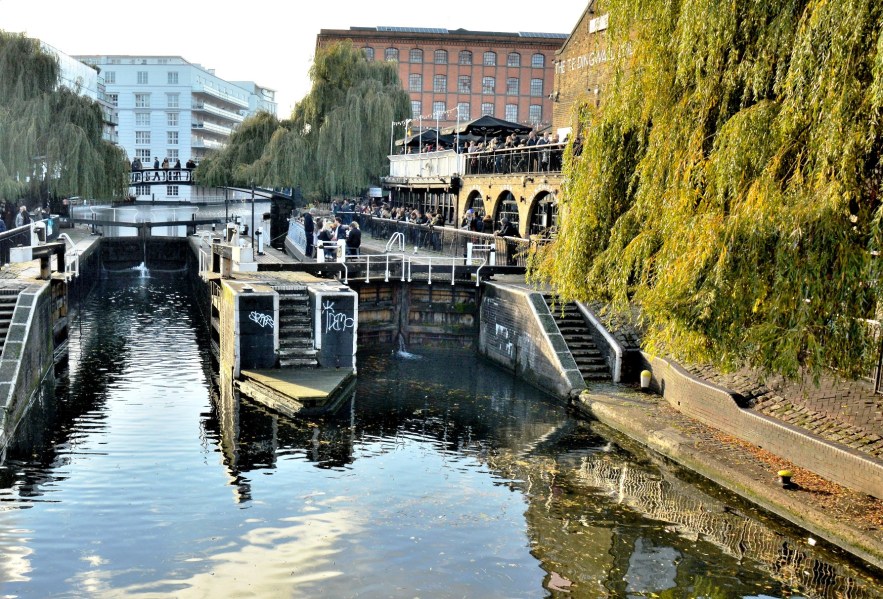 The building on the right is the famous Dingwalls ⇒ music venue and the Comedy Loft ⇒.   A little further on from the lock is the stop for the London Waterbus ⇐ to Little Venice.

The market halls are quite fascinating and lead down to the canal side with a number of eateries. 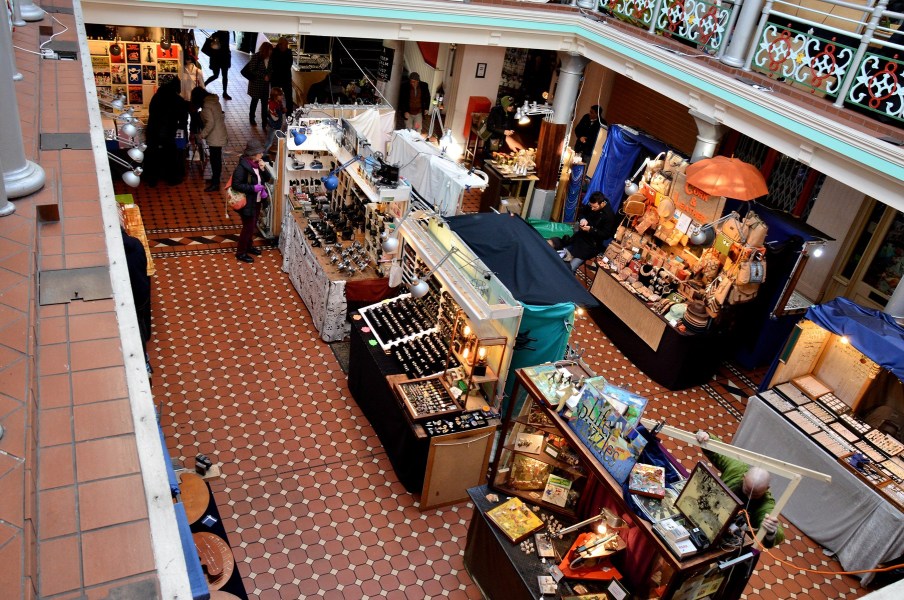 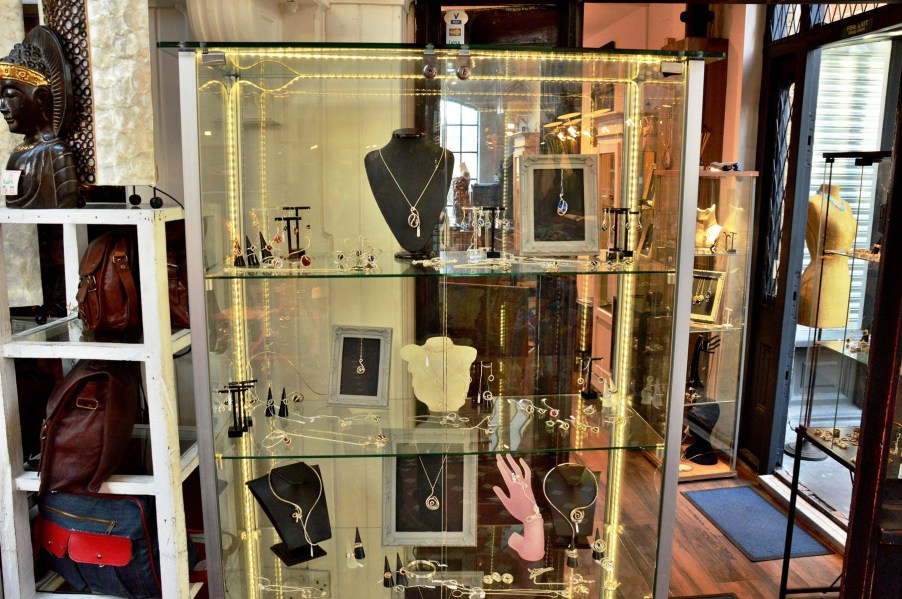 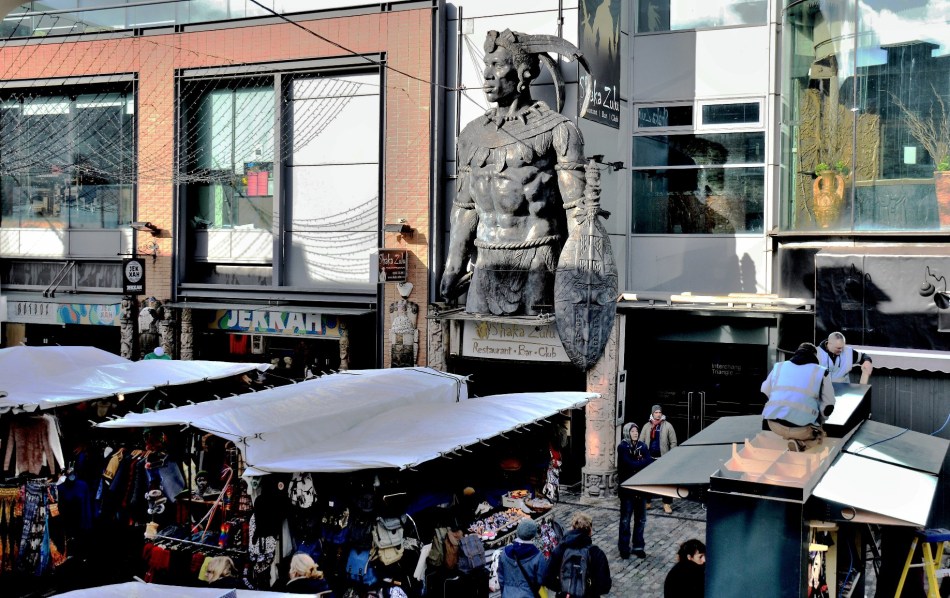 On the side away from canal is Camden Lock Place and another market area. Turn right at the sight of Shaka Zulu and you will come back to the High Street. 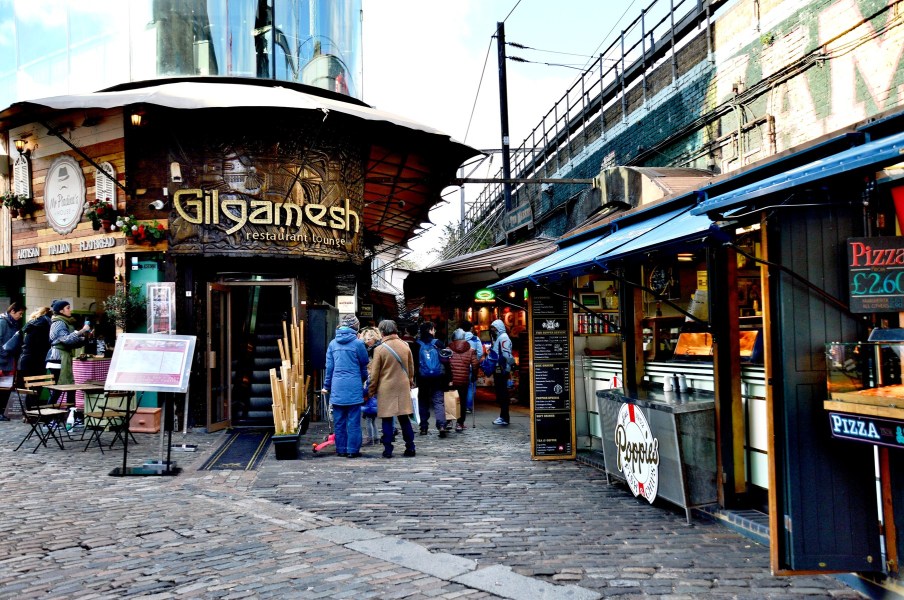 This picture is with the High Street at my back and you will find Gilgamesh on your Google map.  Don’t go back onto the High Street but venture down the little alley on the right of the picture. 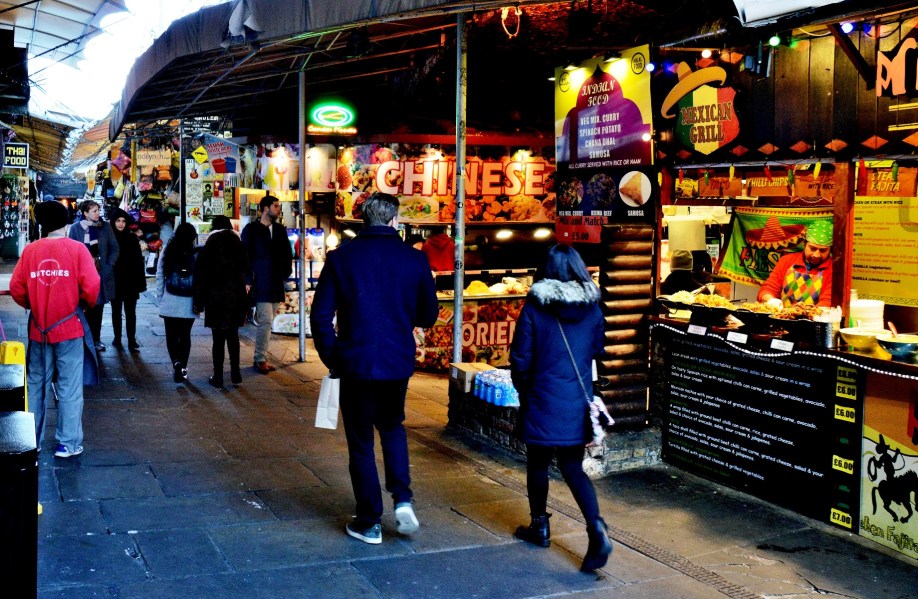 The first thing that strikes one is a magic carpet of spiced aromas from all over the world.  I got the impression that if I stayed too long I would be forever mesmerized and never leave.

But, if you continue then there is an Alladin’s cave with many side alleys to watch out for. 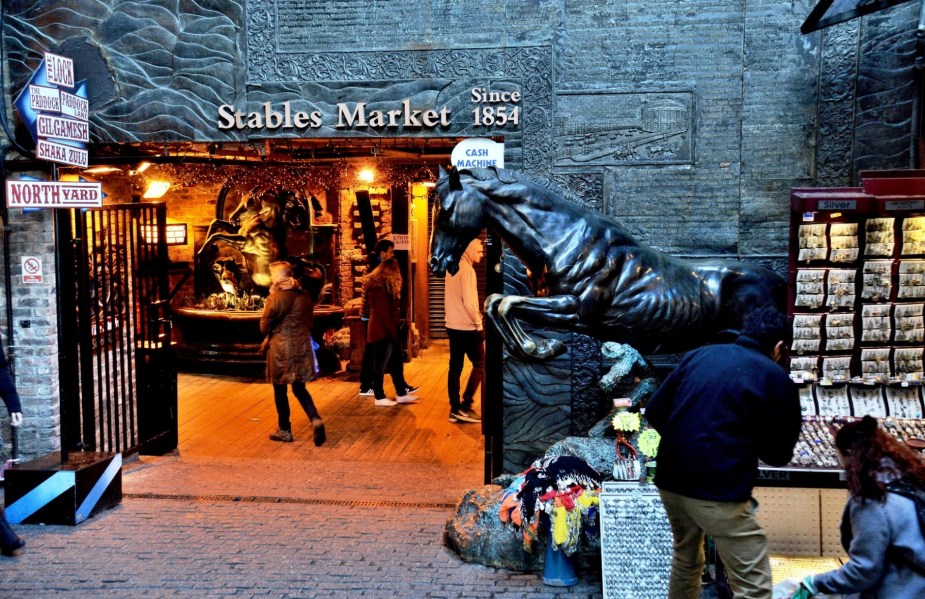 Camden Lock and the Regents Canal are part of a huge canal network stretching across Britain and the lock once provided stables and a hospital for the barge horses. 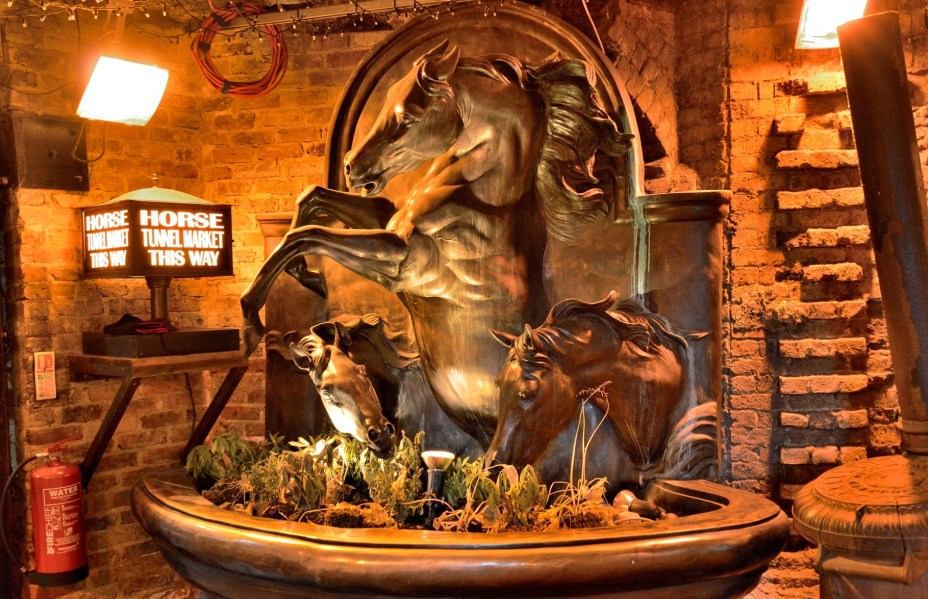 Hidden away, it is one of largest markets in Camden with a plethora of arts, crafts and fashion.  I can only show a small part of it. 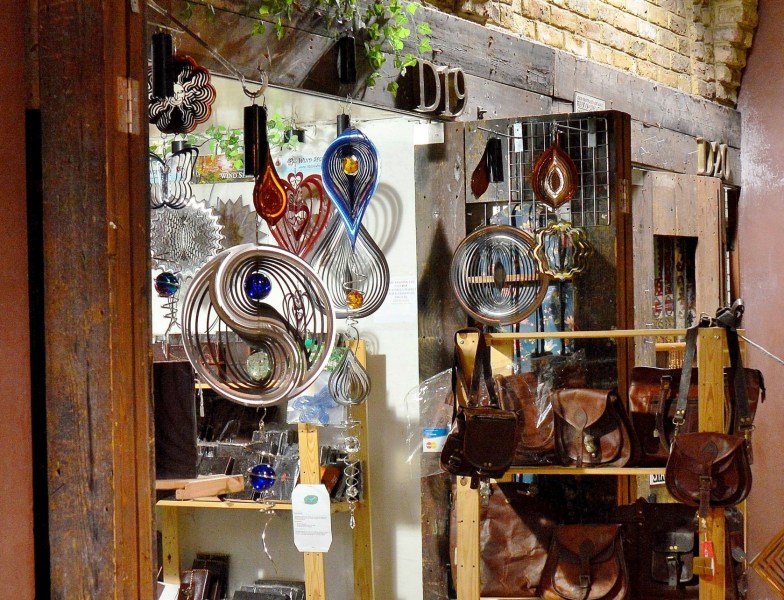 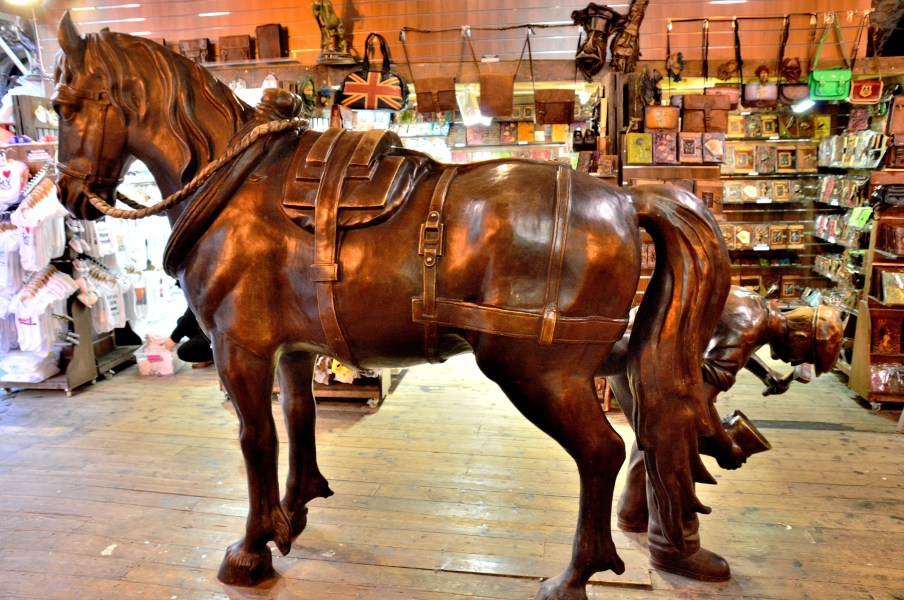 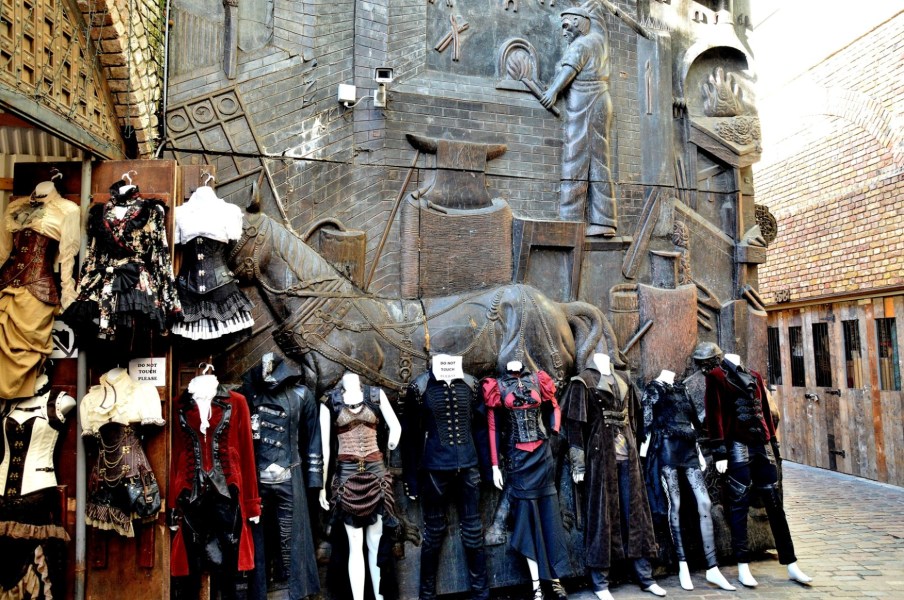 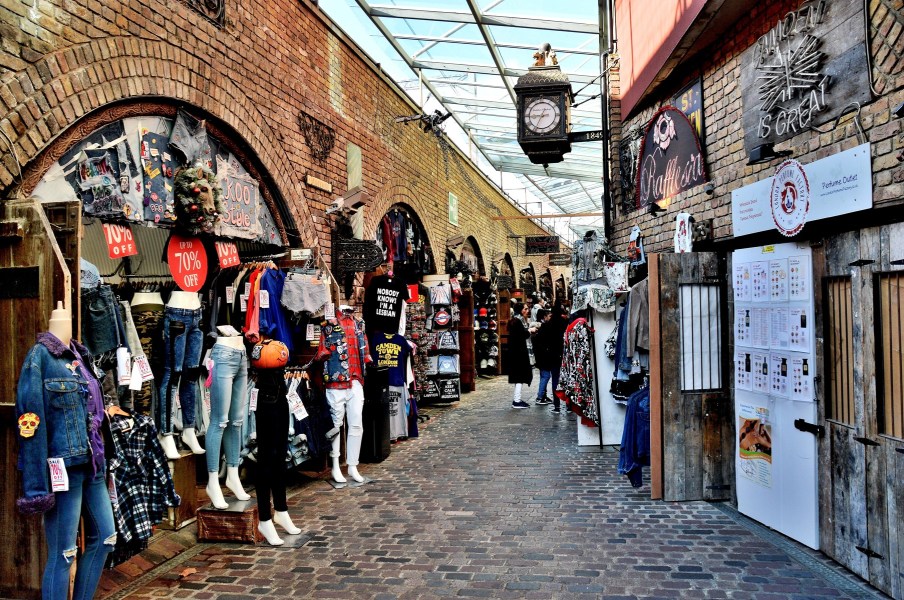 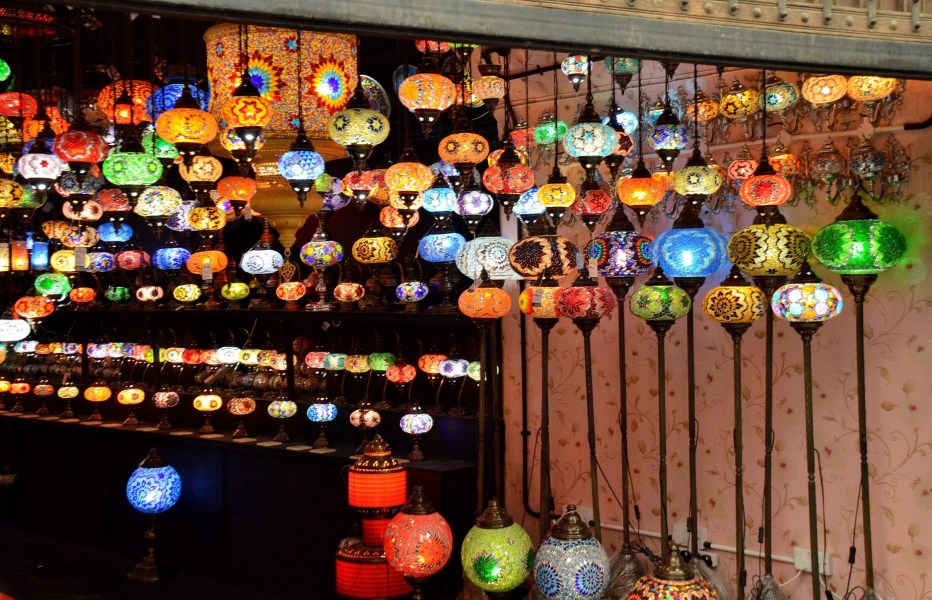 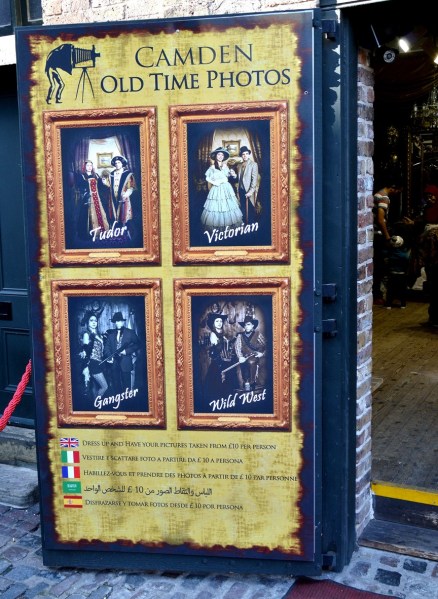 If you can find your way out, passing this sign, then there is yet another market area curving away into the distance but eventually returning to the canal. 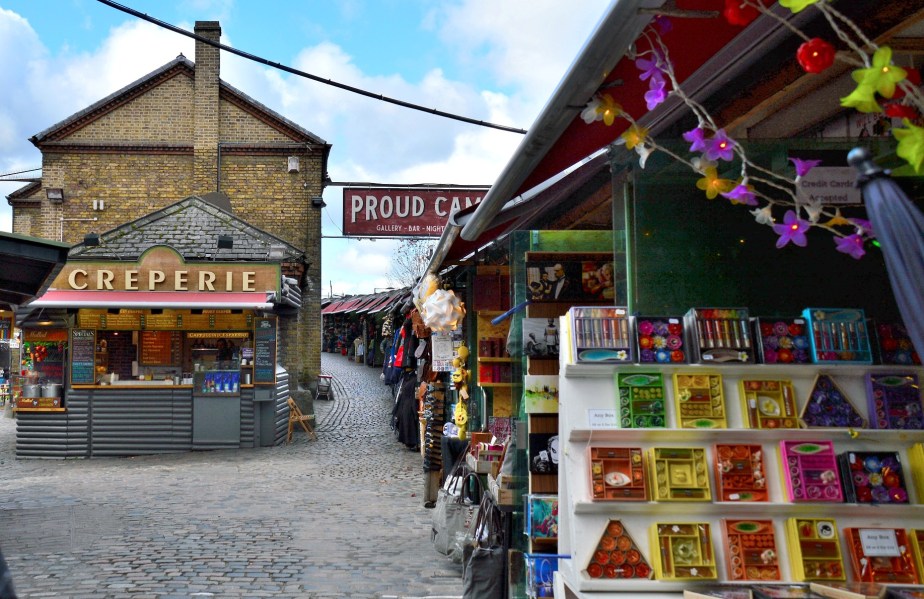 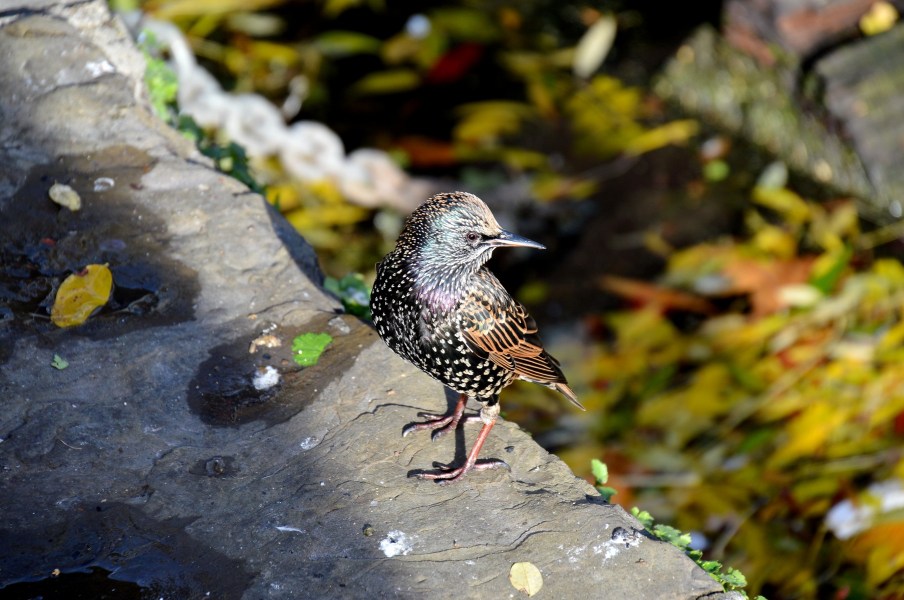 One of Camden’s Little Wizards

Returning to the canal one might take a coffee and watch some of the little wizards taking a bath.  Then there is eating and drinking and making merry or the Dingwalls ⇒ music venue or the Comedy Loft ⇒ or a short walk up the road to The Roundhouse Theatre ⇒ at Chalk farm (where you booked a ticket) or, earlier in the day, the London Waterbus ⇐ to Little Venice and the Puppet Theatre Barge⇒ (October to July) .

One might happily contemplate any of these delights or the soft ghostly figures of a horse drawn canal barge with the mellow spirits of a bargee family taking tea in the quiet of the evening, or wake up in front of one’s computer screen having been spellbound by the little wizard.  Well, one might.  🙂